On 7 January 2016, Everton announced the signing of an exciting 21-year-old Kosovan-born Swiss forward from Grasshoppers called Shani Tarashaj. He had appeared in all eighteen of his side’s league games that season, contributing eight goals and an assist as a shadow striker playing in behind Israeli Munas Dabbur. He would return to Switzerland on loan for the rest of the season where he added another three goals to his tally helping guide Grasshoppers to a fourth place finish and a Europa League spot for the following campaign. He performed so well domestically that Vladimir Petković took him to France for that summer’s European Championships. He made a single substitute appearance against Romania as he saw his adopted nation eliminated by Poland on penalties.

And then his career just stopped.

Tarashaj joined Eintracht Frankfurt on loan in the summer of 2016 after Everton signed Yannick Bolasie and Dominic Calvert-Lewin who were capable of playing in a similar role, but the alarm bells would have been ringing when Ronald Koeman decided he needed to bring in Enner Valencia on loan from West Ham on deadline day. Tarashaj struggled in Germany, making thirteen appearances all season in the league, with all but one coming from the bench. A 3-0 win over Hamburg was the only match in which he played more than 45 minutes. It was a game atypical of his time in Germany; it was the only time that season where he contributed either a goal or an assist, and it was the only game where he started on the left-wing, a position he’d never played in while at Grasshoppers.

Petković decided to leave Tarashaj out of his first squad after EURO 2016, instead giving him the opportunity to join up with the Under-21s squad, before promoting him to the bench for the World Cup qualifier against Andorra. Tarashaj hasn’t been involved in the national team set-up since and with the emergence of other young talents such as Breel Embolo and players such as Haris Seferović, Josip Drmić and Admir Mehmedi impressing at club level, Tarashaj is now some way down the pecking order. 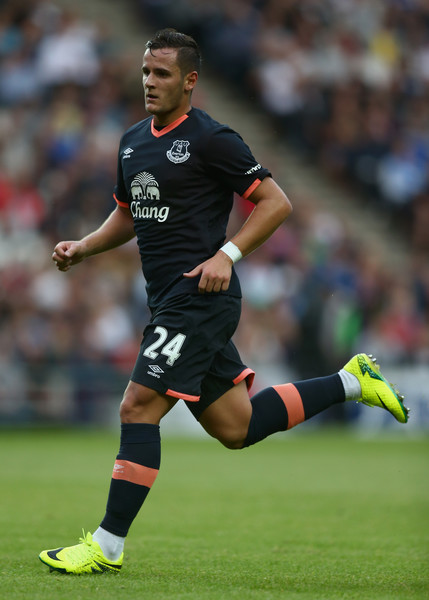 If 2016/17 was a step backwards for Shani Tarashaj, then this season has seen his career come to a complete standstill. A meniscus tear at the end of the season in Germany slowed his progress and made him an unappealing prospect for any potential summers in the summer. However, Everton then went on to sign Davy Klaassen, Wayne Rooney, Gylfi Sigurdsson, Sandro Ramirez, promoted Tom Davies from the Under-23s while he was away and this month brought in Cenk Tosun and Theo Walcott too. It’s safe to say that Sam Allardyce’s most recent transfer activity does not bode well for Kosovan-born refugee.

To underline just how forgotten Tarashaj is, Wikipedia haven’t even updated his playing stats to include this season, Everton haven’t even given him a squad number this season, even though 46 other players at some point this season have been awarded one at some point during the campaign, and the last article to mention him when you search for his name was written in March 2017. (UPDATE: Liverpool Echo published a story 45 minutes before this went live, talk about good timing.)

While training with Switzerland in the lead up to EURO 2016, Tarashaj must have thought that the World Cup in Russia would be coming at the perfect time for him and a young, improving Swiss side. Instead, Tarashaj will very much be a spectator this summer, with his move to the Premier League being one of the biggest disappointments in recent memory.