It was an extraordinary afternoon and evening of football at Colston Avenue, the home of Carshalton Athletic as the World Football Cup reached the semi final stage.

The four sides still left in the competition were playing their fifth match in the space of seven days, but the tempo of both games suggested that fatigue certainly wasn’t an issue, and any neutral experiencing the WFC for the first time would have been impressed by both the standard of play and support from the fans.

The afternoon kicked off with Group B runners-up Northern Cyprus playing the in-form Padania, in a clash many expected to be the final of this year’s competition.

Northern Cyprus had been failed to beat Karpatalya and Abkhazia in their group, but a convincing win against Tibet set up a quarter-final with hosts Barawa. The Cypriots wasted several chances in the first half of that game to only go into the break with a one goal advantage, but they made light work of a depleted Barawan side and scored seven after the break to reach the last four with an 8-0 victory.

Padania were the heavy favourites in Group C, winning all three of their games and scoring seventeen goals in the process. It set up a tie against a tough but slightly disappointing Panjab side, and goals from Ravasi and Innocenti kept the Italians 100% streak going. All through the tournament the Padanians have been efficient in front of goal, and this was the case again in their first knockout stage, as Panjab had more possession and territory, but couldn’t replicate Padania’s ruthlessness.

Northern Cyprus followed a similar game plan to Panjab in this game, controlling the ball in the midfield area, and creating several early chances. The best of these chances fell to Halil Turan, and only a smart save from Marco Murriero in the Padania goal prevented the well-supported Northern Cypriots from going in front. There were protestations from the side wearing all red, but without the benefits of goal-line technology at seventh-tier Carshalton, the officials’ decision could not be overturned.

As so often as we’ve seen in this contest, Padania’s clinical finishing allowed them to take the lead on the half-hour mark. A missed headed clearance inside his own half from Ahmet Sonmez allowed Padania to attack swiftly and overrun their counterparts, and it was Riccardo Ravasi who scored his second goal of the knockout phase that put the Italians in front with a low finish.

Northern Cyprus were level shortly afterwards, their energetic pressing of Padania’s back line finally paying dividends, as Kenan Oshan received an inaccurate pass from Murriero and his quick feet in the box saw the ball fall at Billy Mehmet’s feet. The former West Ham trainee made no mistake and gave the goalkeeper no chance from close range.

The teams really should have gone into the break at 1-1, but the Northern Cypriots switched off just before the break, and in typical Padanian style they made them pay. A low finish from Giacomo Innocenti proving the difference before the half time interlude.

Padania allowed the pressure to build on their defence in the second half and faced an attacking threat they had yet to come up against in the competition. A very one-sided Carshalton crowd were firmly behind the Mediterranean side, but it wasn’t until the 80th minute that Northern Cyprus finally equalised.

Substitute Umur Gök, who has impressed a lot of spectators over the past week, did brilliantly in the Padania box but couldn’t find a teammate with his cross, however the resultant corner was met by a Northern Cypriot head forcing an unbelievable reaction stop from Murriero, but the rebound fell to top scorer Halil Turan, who would have found it harder to miss from two yards out.

The momentum was firmly with the Cypriots at this stage, and with the crowd behind them, they scored the winner three minutes later. Billy Mehmet added his second of the game and was chased down the touchline by every member of his side’s delegation as Gök once again turned provider by outrunning the Padanian full-back and putting his cross on a plate for Billy to head home.

Padania looked exhausted and defeated before the full-time whistle was even blown. They created one more chance before the end, but couldn’t convert and looked dejected as they came to the realisation that the poorest 45 minutes of football they’ve produced in London came at such an important moment in the tournament. A straight red card for Gianluca Rolandone for an elbow on Yasin Kurt meant his tournament had come to an end, regardless of what contest Padania would be involved in on Saturday.

The Northern Cypriot celebrations lasted probably longer than CONIFA would have liked them to, as the second semi-final was slightly delayed, but it was no less than they deserved, and for the good of the tournament, it was vital that they progressed. The atmosphere their fans are able to create at Enfield Town is extraordinary and will make for a fantastic conclusion to this contest.

In the second semi-final, it was the battle of the Hungarians. Karpatalya – the Hungarian diaspora in Ukraine – played Szekely Land – who also originate from Hungary, but are situated in Romania. Karpatalya had topped Northern Cyprus’ group despite being late entrants to the World Football Cup after Felvidek withdrew. Victories against Tibet, reigning champions Abkhazia and Cascadia had seen them reach the semi-finals of their first major tournament.

The Szekely Land were the runners-up in Padania’s group, and although the Italian side had resoundingly defeated them on Sunday, they had made light work of Tuvalu and Matabeleland, before coming out on top in a feisty affair against Western Armenia, which saw two of their players and their manager sent off.

Much like the first semi-final, there was only one team being loudly supported in the stadium. Szekely Land’s followers have gained a reputation across the tournament for their enthusiasm and occasional use of flares and they lived up to both stereotypes in this tie as well.

The first half an hour offered little in terms of clear-cut chances, a mistake from Nagy in the Szekely Land goal nearly gifted Takacs the opener, but a brave last-ditch tackle from Czismadia prevented the team in Hungary’s traditional colours from taking the lead.

Gyorgy Toma – Karpatalya’s incredibly gifted young attacker – was the star of the evening and opened the scoring for his side. Toma took the ball past three Szekely Land defenders in the box before slotting a composed finish past the goalkeeper to put his side in front. Karpatalya’s proficiency in doing the basics right in every area of the pitch alongside the individual brilliance of several of their attackers has made them a force to be reckoned with in London over the past week. 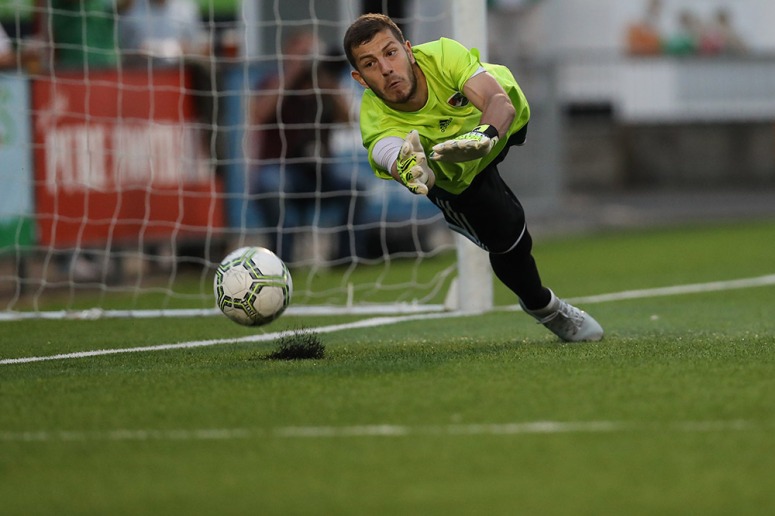 Szekely Land really should have gone into the break at one-all as Mark Clattenberg awarded the psuedo-home side a penalty. However, for the second time in my presence, they were denied, this time by a fantastic save by Fejer, who got down quickly to his right and preserved his clean sheet with a strong hand. He heroically blocked the rebound too, picking up a knock in the process, but continued for the rest of the match.

The game looked to be out of reach for Szekely Land after 75 minutes as Karpatalya expertly raced into a 3-0 lead. Toma doubled his tally for the evening with a hard hit volley from outside the area proving too much for the goalkeeper, who stopped the initial shot, but was outfoxed by the spin on the ball that carried it over the line.

Karpatalya were then awarded a penalty of their own after some dogged defensive work high up for the pitch from Gyorgy Toma. He won the ball with a clean slide tackle off the centre back, before recovering more quickly, bursting into the area before then being taken out by the defender. Gyurki the forward stepped up and made no mistake, sending the keeper the wrong way.

At this point, the Szekely Land fans rallied behind their side and got many of the neutrals in the ground to join them in cheering on the men playing in sky blue. They immediately responded, first through quickly taken free kick which was chipped into the box and dispatched, before Barna Bajko placed his volley from outside the box into the corner and suddenly his side were only 3-2 down.

Szekely Land had been wasteful throughout the game, and Karpatalya had taken their foot off the gas in a similar display to Padania before them, however the team in blue couldn’t put away any of their half chances and allowed the Group C winners to hit them on the break and confirm their place in the final, as they scored their fourth in added time.

Their are parallels to draw between Denmark’s 1992 European Championship run and Karpatalya’s run this summer. Neither qualified originally, but when they were admitted into the tournament, didn’t give many of their opposition – some of whom probably underestimated them to begin with – a chance.

Northern Cyprus will have the whole crowd behind them on Saturday in the 6:30pm kick-off at Enfield Town, but they will have to draw on the crowd’s energy and be at the top of their game to come out on top against a Karpatalya team who are looking for the fairytale ending to their World Football Cup.