Fulham fans were excited when the announcement came through last summer that they had secured French winger Anthony Knockaert on a season-long loan from Brighton for their return to the Championship. The 27-year-old had appeared in 30 Premier League games the previous season and had been an important player for the Seagulls since he’d arrived from Standard Liège midway through the 2015/16 season.

He also had proven track record at Championship level, recording 15 goals and 8 assists in Brighton’s promotion campaign in 2016/17, although he had struggled to be as effective the Premier League.

News is now emerging that the right winger is expected to join Fulham on a permanent basis in the coming days, with manager Scott Parker stating, “He’s done extremely well. I think Anthony would be the first to say as well that he can still bring even more.” In this piece, we’ll be looking at just how well Knockaert has done this campaign, and whether bringing him in on a permanent basis is the right course of action for the Whites. 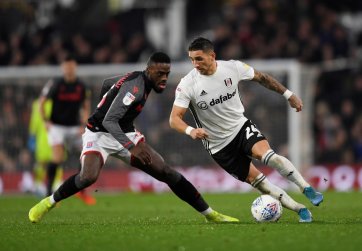 Last season, Chris Hughton’s Brighton struggled and Knockaert was in and out of the team. Hughton’s squad had a variety of options available to play in midfield and when they were fit, Davy Propper, Solly March, Dale Stephens and Pascal Gross were all considered essential by Hughton. This meant Knockaert was competing for a final spot in the starting XI with Alireza Jahanbakhsh – whose season was affected by injury – Jurgen Locadia, Beram Kayal and Jose Izquierdo. The signing of Leandro Trossard last summer created even more selection headaches for new manager Graham Potter, especially with the emergence of utlility man Steven Alzate.

For all these reasons, Fulham were then given the opportunity to take the Frenchman on loan, and alongside the new signings of Ivan Cavaleiro and Bobby Decordova-Reid, Fulham had a new offensive line in place to support Aleksandar Mitrović.

Fulham’s tactical set up under Scott Parker this season has been either a 4-3-3 or a 4-2-3-1 depending on the personnel selected to play behind Mitrović. Their build up play has been slow, measured and very possession heavy, with an emphasis on building from the back through centre backs Tim Ream and Michael Hector.

Fulham’s full backs, especially Joe Bryan on the left, are instructed to overlap and support Fulham’s wide players, although there’s been no obvious tactical instruction on how best to get the ball to natural goalscorer Mitrović. The Serbian striker is playing well below himself in England’s second tier with 23 goals from 36 games, however, his most impressive skills – being dominant in the air and able to hold up the ball well – are sometimes under-utilised in Fulham’s set up.

A supporting winger for Mitrović needs to have several key attributes. They need to be able to create a number of chances from the wide areas, producing accurate crosses for Mitrović. They need to be comfortable dribbling at defenders in order to do this, however, raw speed isn’t a necessity. Due to Fulham’s patient build-up play, mainly due to the Serb’s lack of pace, Fulham very rarely hit teams on the counter.

The player in question also needs to be able to keep the ball well and have good decision making. Recognizing when there may be a better option than attempting to cross or shoot is important in a team that rely so heavily on being in possession.

The majority of Fulham fans would have expected more from Knockaert during his time at Craven Cottage so far. The winger has played in all but four of Fulham’s league games this season, starting 27 out of 40 matches thus far. Three goals and four assists so far mean Knockaert is involved in a goal once every four games for Fulham, a disappointing output from a player so heavily involved.

To solely blame Knockaert for this though would be very unfair. A predominantly left-footed player, Knockaert has never been a winger who looks to beat a full-back down the line and put a cross in with his weaker foot and has instead been encouraged to pick up the ball in advanced areas, cut inside and either shoot or lay off a pass to a teammate.

Knockaert does average more key passes via crosses than any other player in Fulham’s squad, but this number is just over one per 90 minutes (via WhoScored), a criminally low output considering Mitrović’s prowess in the air, and only two of his assists have come via this method.

Knockaert has also attempted more than 40 fewer dribbles this season than his counterpart Cavaleiro on the opposite wing, and only has a 52% success rate when running with the ball at his feet which is marginally worse than Cavaleiro’s 54%. Too often both wingers are dispossessed in key creative areas, although once again the blame doesn’t lie solely with the players, as Parker too often instructs his wingers to start high up the pitch on the touchline, leaving them isolated and unable to easily link up with Mitrović in front of them or Tom Cairnery and Decordova-Reid laterally.

Only Mitrović has attempted more shots this season than Knockaert for Fulham, however, nearly half of these shots have come from outside the box. The result is sometimes spectacular, goals against Aston Villa in the FA Cup and West Brom in the league look good in the highlights reel, however, too often the result of Knockaert cutting inside and shooting is a turnover in possession.

The likelihood that Aleksandar Mitrović will still be at Fulham next season is entirely dependent on promotion. It would be a waste of talent if the Serb spent another season in the Championship, however, to find alternatives to Knockaert we’ll assume that Fulham bring in a striker with a similar skill set.

This means we’re looking for a player with good dribbling and crossing stats, and good short-to-medium range passing. Accurate shooting and pressing in the attacking and middle thirds are useful skills but not essential attributes with such a productive striker in the side.

Abdou Harroui has been at Dutch yo-yo club Sparta for the entirety of his senior career. The right winger has recorded eight assists this season in the Eredivisie, with only Chelsea-incumbent Hakim Ziyech, Ajax’s Dušan Tadić and Spurs’ Steven Bergwijn above him in the charts.

Harroui concentrates on getting to the byline and putting crosses into the box, either floated to the back post or drilled across the six-yard box. Both options would be ideal for Mitrovic and Decordova-Reid respectively. Strong on the ball and able to compete with full backs physically, he also records a high number of tackles for an attacking player. A move to the Championship for the young Dutchman would suit his skillset, although Southampton were linked earlier in the season.

Gholizadeh arrived from the Persian Gulf Pro League to join Belgian side Charleroi two seasons ago, and after a slow start to the 2019/20 season, has been an important part of their Jupiler League campaign. Six assists and three goals from the right wing represents his best output in a single season, with only Club Brugge midfielder Ruud Vormer proving a better creator per 90 minutes.

Gholizadeh signed a new contract in January, but would still be a cheaper option than Knockaert considering the fee that is currently being reported for the Brighton winger. The Iranian would be following the footsteps of fellow countryman and fan favourite Ashkan Dejagah, although convincing the forward to swap the Europa League for away days to Stoke and Blackburn could prove tricky.

Osayi-Samuel has been a standout performer for QPR this season, with five goals and eight assists coming from the right wing. After breaking through at Blackpool aged 16, Osayi-Samuel has established himself as one of the trickiest wingers in the Championship and contributes a goal or assists nearly every other game on average.

Osayi-Samuel averages less shots and key passes per game than Knockaert but his output has been much more efficient and he also averages nearly three dribbles per 90 mins, a distinct improvement on Knockaert’s output. Crossing would still be a concern though, with Osayi-Samuel preferring to lay the ball off to right backs Todd Kane or Angel Rangel, however, if he’s able to beat his full back and drive into the box, his decision making will be an important attribute as he looks to pick out a teammate with his final ball.

Peterborough United missed out of the playoffs by 0.02 points in League One after the season was cancelled, denying an exciting, high scoring side the chance of earning promotion. However, it’s been difficult to ignore the goalscoring ability of Peterborough’s squad, with Ivan Toney, Mohamed Eisa and Marcus Maddison taking the headlines. However, Ward’s output on the right side for Peterborough puts him in the top 10 for assists/90 mins in League One and would be a budget option compared to Knockaert.

It’s no coincidence that Peterborough’s dip in form around Christmas came when Ward was out of the team, and before the enforced break in the season, The Posh had dropped only 5 out of 27 points once Ward returned to the side. Likely to be too defensive an option for this role, Ward would offer more cover to whichever right-back option Parker goes with next season, something that Fulham have lacked when Knockaert has played. However, it’s difficult to know how Ward would play when given the freedom to get further forward, even though his tendancy to attempt crosses would be welcomed.

Stats all sourced via WhoScored.com and fbref.com