For a generation of footballers, a scruffy-haired number ten in the famous checkered shirt of Croatia conjures up only one image: Luka Modrić. However, another man is starting to make waves in Zagreb looking to make the shirt (and the accompanying hairband) his own: Lovro Majer.

The attacking midfielder has spent the entirety of his career in his native land, but rumours of his departure from the Adriatic nation are gaining momentum. Last summer, a host of clubs including Dortmund, Sevilla and Leeds were considering Majer, and January saw Fiorentina make their interest concrete, although at the time of writing they’ve been unwilling to match Dinamo Zagreb €15m price tag.

“An important cog in the Dinamo machine that performed so well in the group stage, Majer is technically proficient, fast and agile with an eye for goal.”

The trajectory of Majer’s career means his time in Croatia must surely be up in the summer, and although the interest exists from several clubs in the Top 5 leagues, a move to the Netherlands, Portugal or Russia (a step former Dinamo teammate and current international teammate Nikola Moro took last summer) isn’t out of the question. He’ll have the perfect platform to showcase his talents to an English audience when Dinamo face Tottenham in the Europa League last-16 this week.

Domestically, his abilities have been well known for several years. His two seasons with Lokomotiva Zagreb in 16/17 and 17/18 demonstrated his talent perfectly. He recorded double digit assists numbers (the only player in the league to do so) as a 18-year-old in just over 1,500 minutes, recording an assist in every other game on average. The following year, he wasn’t as prolific in a creative sense but was the only player to score more than 10 goals for Lokomotiva, although seven of these were penalties.

The well deserved plaudits arrived, winning Croatian Hope of the Year in 2017, earning a senior call-up and making his debut against Mexico that year and then earning his move to Dinamo Zagreb in the summer of 2018. Since then, he’s gone on to win two 1. HNL titles and looks set to claim a third, and his introduction into Croatia’s most dominant side in recent times has been gradual but understandable. Majer had to compete with Dani Olmo during his first 18 months with the club, but once the Spaniard joined RB Leipzig, his game time became more consistent.

Majer’s key strengths are his crossing, set pieces, vision and impressive technique. Although Majer is very left-footed, he prefers drifting out to the right-hand side of the pitch, allowing him to either cut inside to play a pass, or arrive into the box late if the ball is on the opposite flank. Majer is happy to put a shift in defensively, and has an impressive work rate for a traditional number ten, but rarely sees out games that he starts.

This season, Majer has interchanged with Luka Ivanušec between playing in an advanced central midfield role, and playing on the left of an attacking three. The introduction of Kristijan Jakić from Lokomotiva as a holding midfielder has given Majer more license to join attacks, reflected in his offensive output this campaign.

Within the international set-up, Majer has secured the number ten role and shirt, and will play in this role in March for Croatia. Igor Bišćan plays a classic 4-2-3-1/4-5-1 with Majer flanked by Ivanušec and probably Dario Špikić with either Petar Musa or Sandro Kulenović. In the example above, Majer is on the ball against Wolfsberger in the Europa League. Majer is predominantly left-footed and tends to occupy space on the right, however, in this example the full back has committed to blocking the cross with his left, allowing Majer to cut inside with plenty of space to pick out a teammate in the box to set up the only goal of the game. 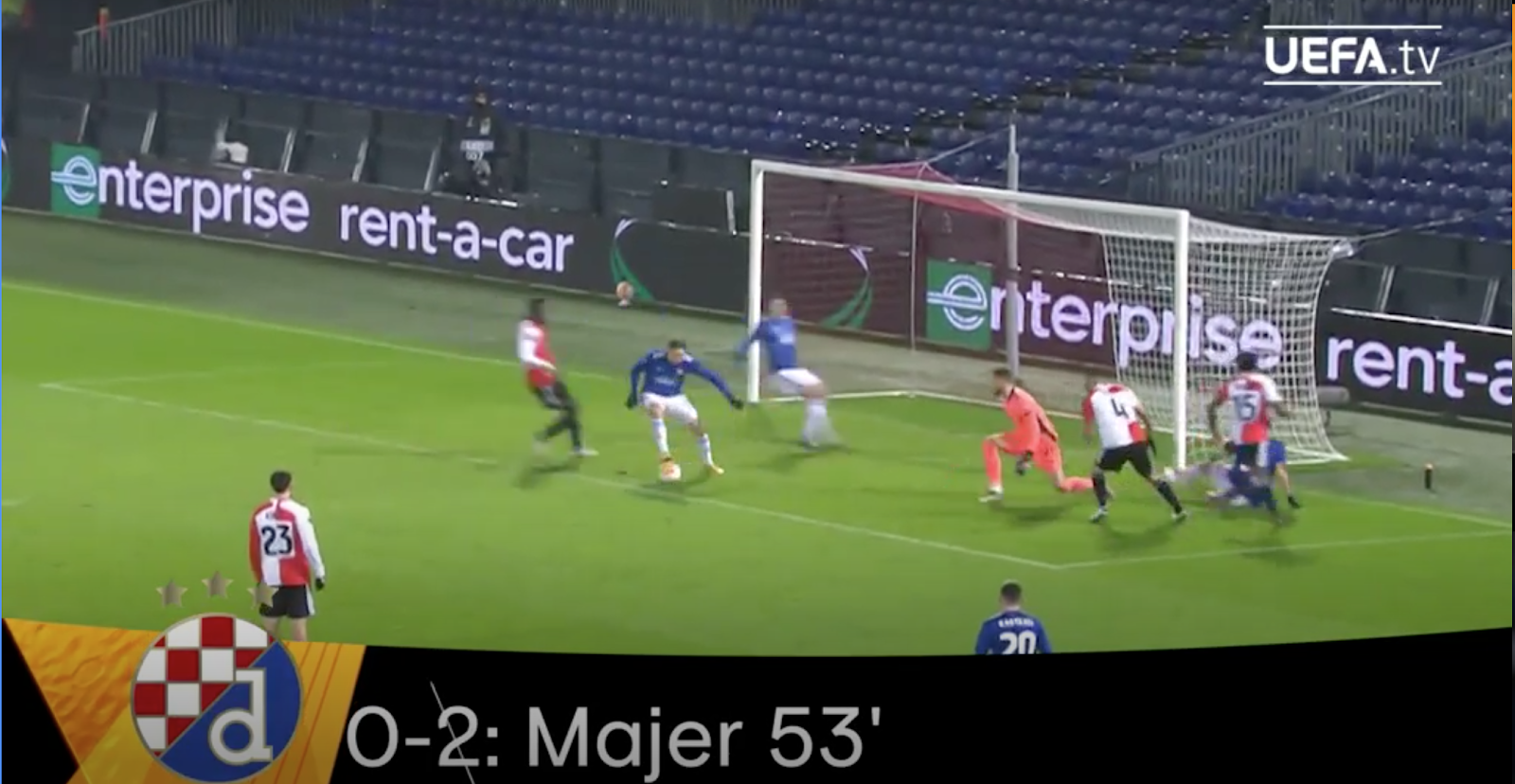 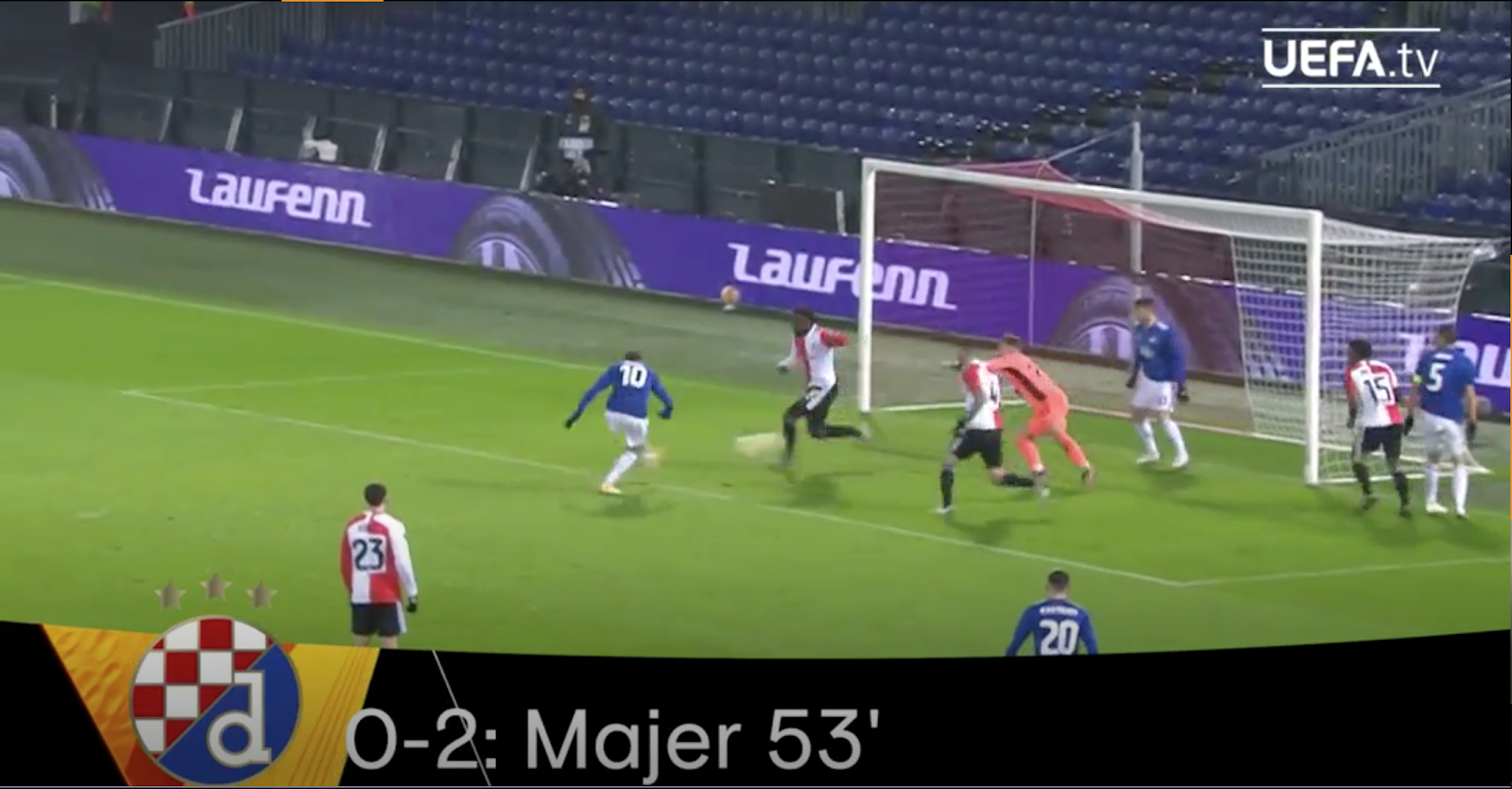 The above example shows Majer’s composure in the penalty area, something evident in many of the goals he scores. The ball has been drilled at him from six yards out but arrives slightly behind him and on his right foot. Instead of trying an improvised finish that wouldn’t guarantee a goal, he takes a moment to shift the ball across his body, get his head up to note the defenders and goalkeepers position, and then power a shot into the empty space.

Arguably his best performance in the Europa League this season came against CSKA Moscow at home. After recording an assist from a corner, Majer showed his vision and longer passing range for his second assist as shown below: 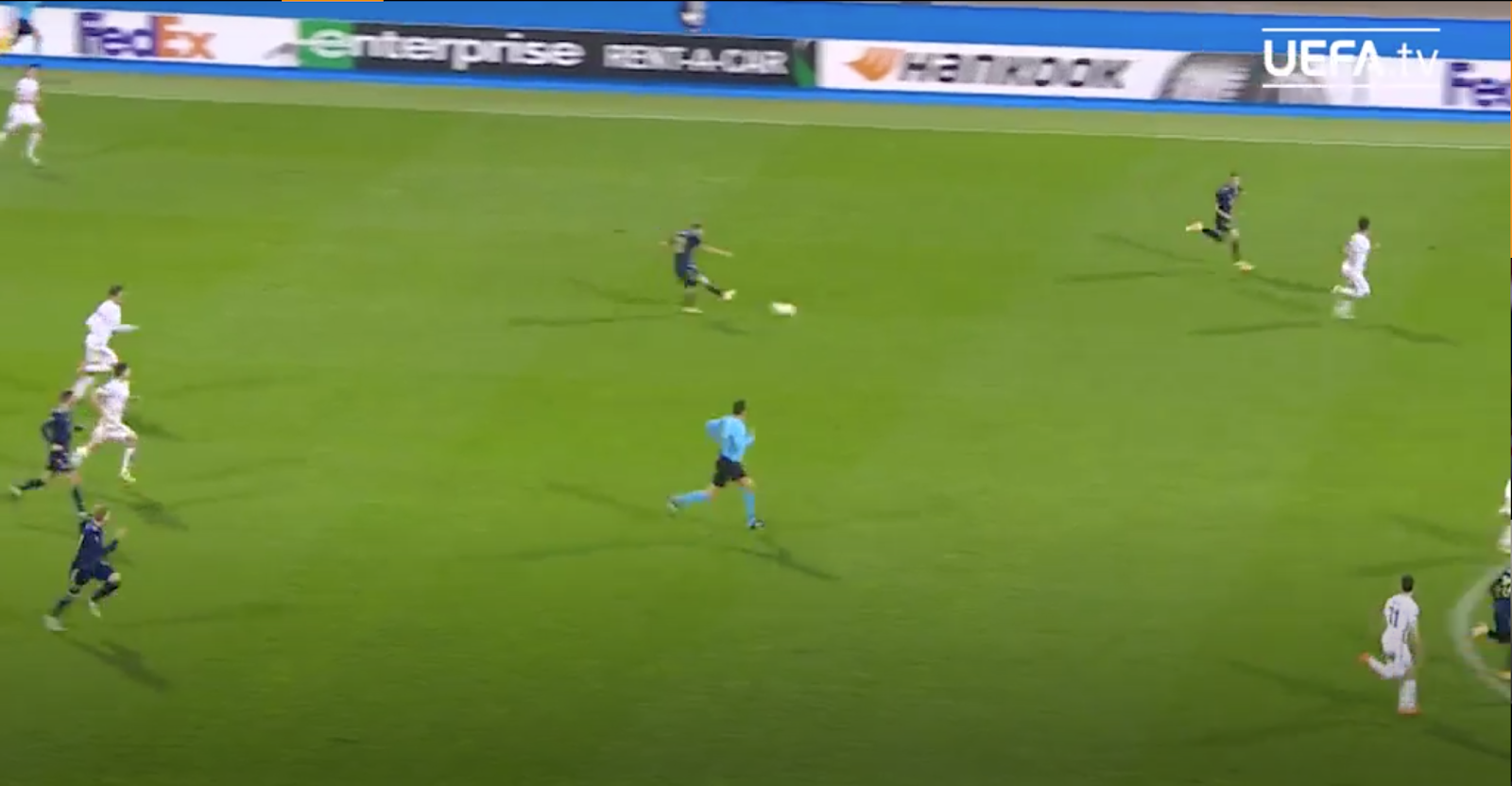 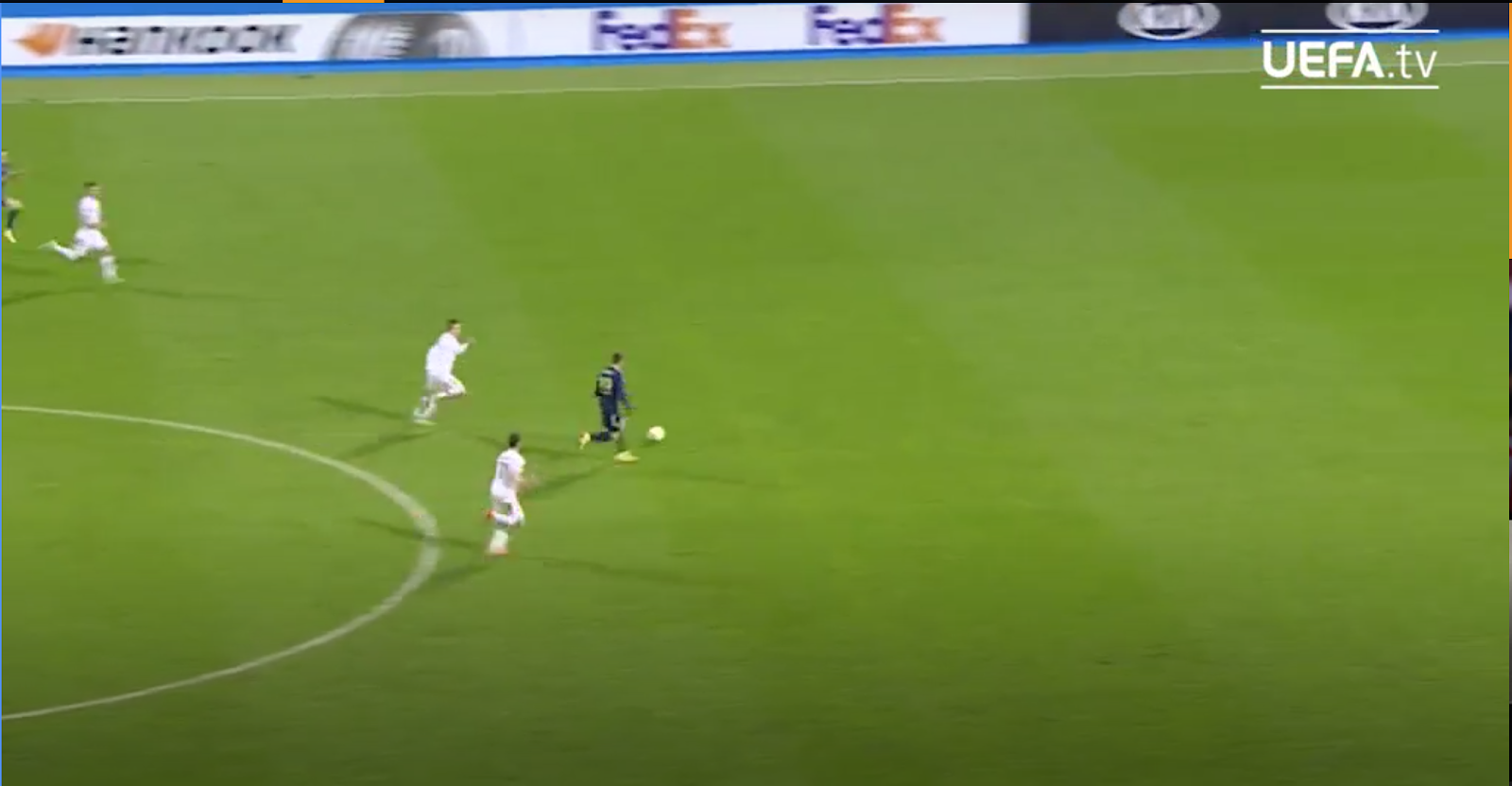 From deep within his own half, Majer has found a pocket of space and immediately gets his head up to try and find the gap in a very high CSKA Moscow back line. Lirim Kastrati starts his run from well inside his own half and has the pace to beat both centre-backs, but Majer has to hit the through ball at the correct power to avoid either defender intercepting it which he does with ease, and without the keeper being able to come out and collect the pass. 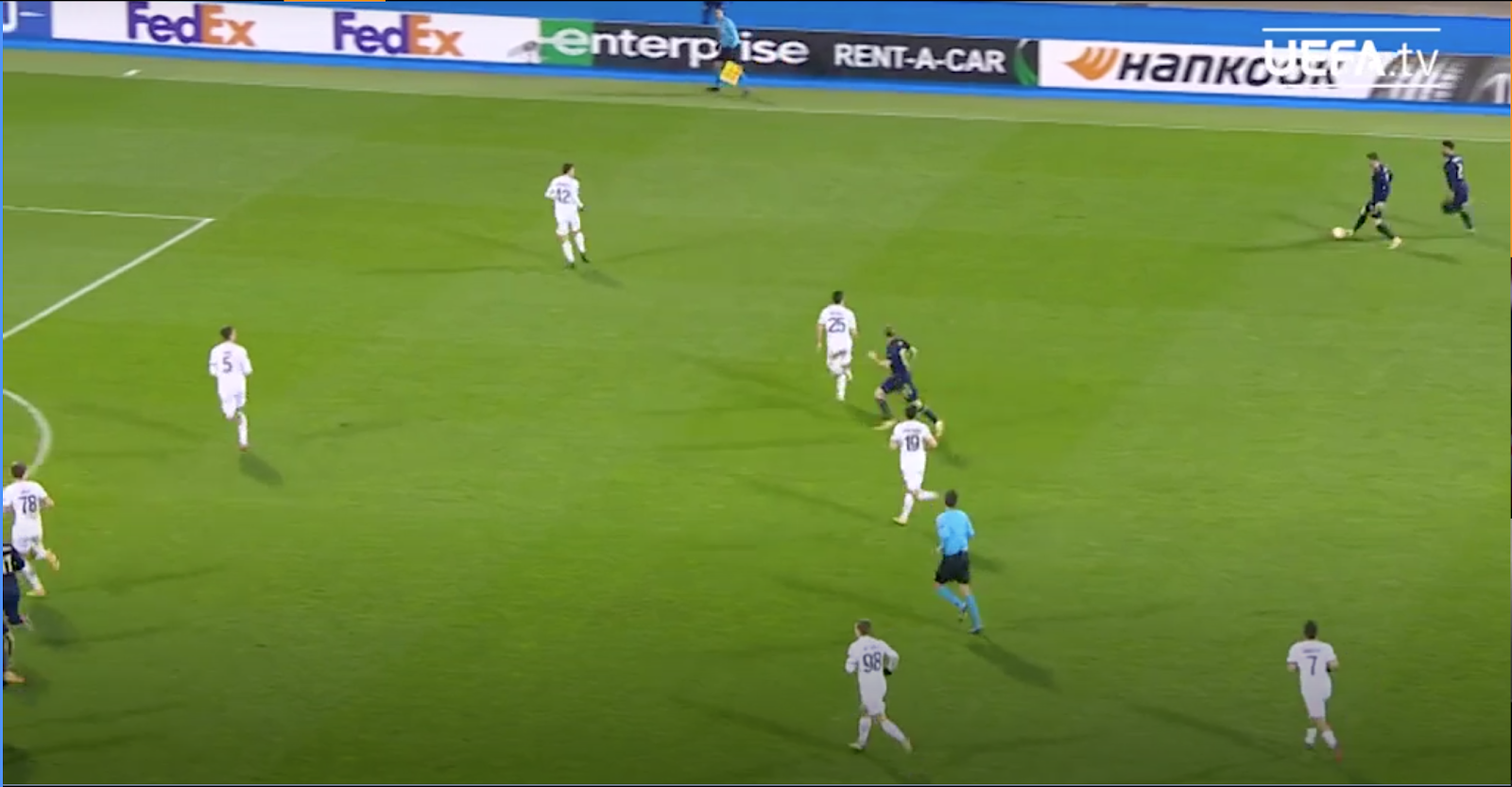 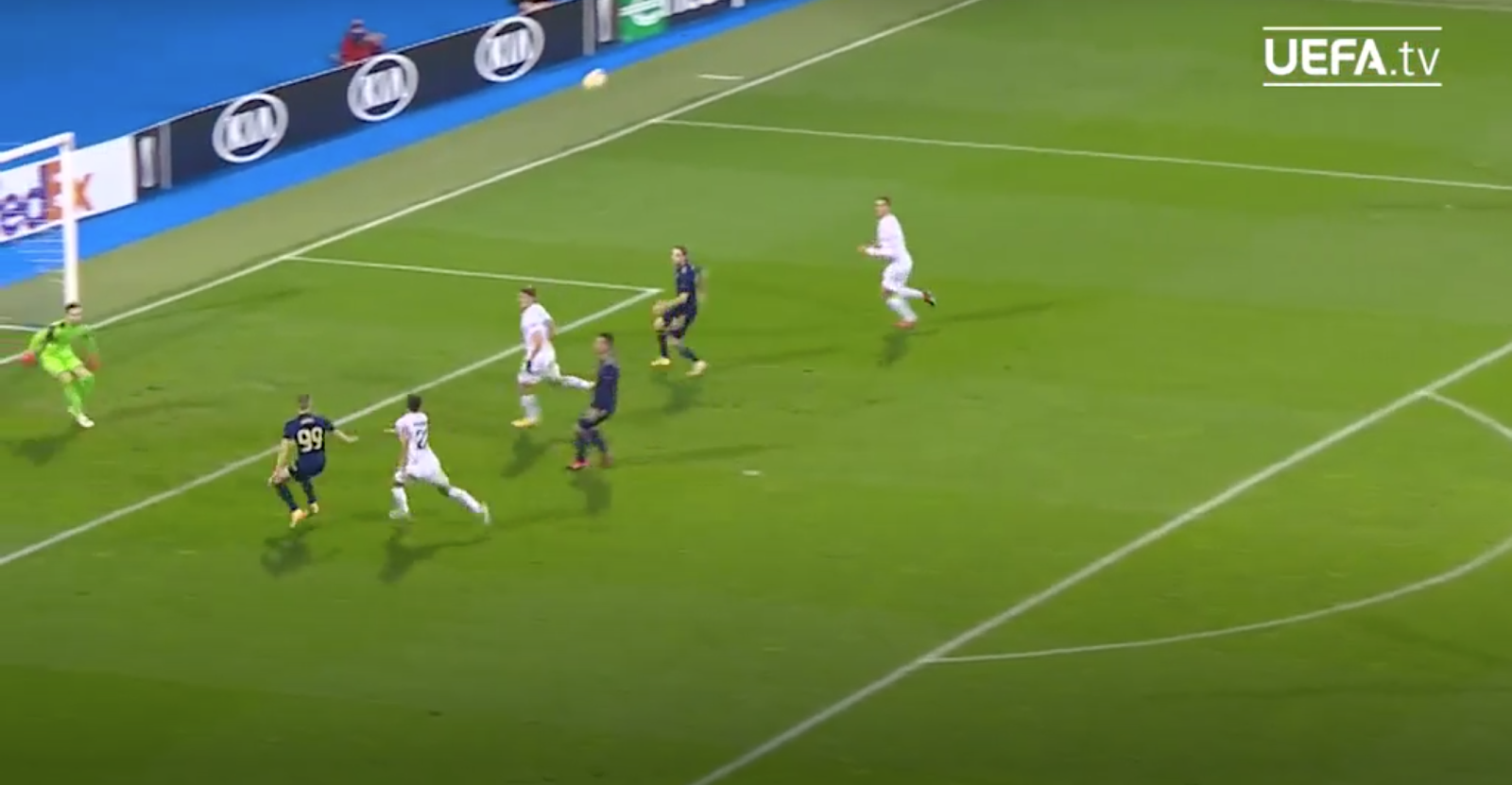 The final example from Majer’s club season highlights his willingness to make runs into the box from deep, something he’s also known to do with Croatia. In the first image, Majer is thirty-five yards from goal (making the run in the centre of the pitch), however, by the time the cross has been floated into the box seconds later, he is already beyond the penalty spot, ready to pounce on a rebound or knock down.

A good example of Majer’s anticipation can be seen in Croatia’s 1-0 victory over Greece in the qualifiers. When the original cross comes in from the left, not pictured, Majer is making another late run into the box. The ball is partially cleared and the situation in the box resets, however, when the shot from the right-hand side of the box (top picture) is taken, he’s the only player on the front foot, so when the ball is drilled across in the bottom picture, he’s in the best position to finish (Majer is the man in the middle of the six yard box). The fact he scores the goal with his chest is another nice piece of improvisation.

As mentioned above, it feels like Majer’s time in his homeland is coming to an end. His next step is important, accumulating plenty of minutes is still important, although his performance in the Europa League group stages suggests he’s ready to turn out for a team either aiming to win the competition outright or playing the Champions League.

AND FINALLY ON CROATIA…

Igor Bišćan has steadily worked his way into the Croatia U21 job, leaving his role at Rijeka to take his current role in 2019. Croatia continue to produce an impressive level of talent considering the size of the country and this generation is no different.

The key players to look out for behind Majer include goalkeeper Adrian Šemper who is having a wonderful season at Chievo Verona, centre-back Joško Gvardiol who has already secured a move from Dinamo Zagreb to RB Leipzig in the summer, and Nikola Moro, who has also jumped ship from Zagreb to join Zagreb’s namesake in Russia: Dinamo Moscow.

Croatia line up in Group D alongside Portugal, England and Switzerland and despite the strength of their squad, Croatia are unlikely to be favourites to progress to the knockout rounds in June ahead of England and Portugal, however, the pressure will be on England who capitulated two years ago at this level, and have arguably an even more talented squad this time around. It wouldn’t be the first time Croatia have triumphed against England recently either…

If you enjoyed this, please follow me and From The Halfway Line on Twitter to make sure you never miss another story, or to see more profiles, click here. Stats sourced from TransferMarkt, FBRef and SofaScore, heatmap sourced from SofaScore.