The summer of 2018 was supposed to be the most exciting pre-season of Amine Gouiri’s career. After impressing in the UEFA Youth League with Lyon’s U19s, Gouiri had broken into the first team at the end of the 2017/18 season, making ten appearances in all competitions. But the day after Lyon’s second Ligue 1 game of the season a short statement was released by the club: Gouiri has ruptured the anterior cruciate ligament in his left knee during training, and like that his season was already over.

Gouiri recorded one senior league minute between August 2018 and May 2020 for Lyon. Thankfully, he was able to record more than 1200 minutes for Lyon’s youth teams during the 2019/20 season, but it was clear that his first team opportunities in France’s Auvergne-Rhône-Alpes region were over. So Gouiri swapped Lyon for the Mediterranean climate of Nice, and under the tutelage of Patrick Vieira (and later Adrian Ursea) Gouiri was finally given a platform to showcase his talents in France’s top flight.

“Amine confirmed what he’s shown since he arrived here. He’s ambitious, wants to improve and gives himself the means to succeed. His work paid off. He’s not a winger who’s going to stay wide. He likes to get on the ball and play between the lines.”

Gouiri is a left-sided forward, comfortable either on the wing or playing as a centre-forward. His goalscoring record – particularly in France’s youth teams – is remarkable. In 55 appearances from France U16 to U21 level, he has scored 47 goals, although the quality of the team around him and the opposition they’re coming up against has to be considered. Gouiri isn’t the fastest attacker and is unlikely to ever run in behind onto through balls, instead preferring to pick up the ball in deeper areas with his back to goal or on the half-turn and dribble into space.

In the penalty area, Gouiri is adept at finding space to shoot, which is a great skill to have but does come with the caveat that he’s not the most comfortable finishing first time and prefers to set himself with a touch that sets his shot up onto his right-foot. At club level, Gouiri starts as an inside forward on the left if Kasper Dolberg plays, or centrally if the Dane isn’t involved. Nice currently find themselves in mid-table and have already sacked the manager that brought Gouiri to the club, as Adrian Ursea replaced Patrick Vieira at the beginning of December following Nice’s exit from the Europa League. However, even if results for Nice have been disappointing, Gouiri is argubly in his best form of his short Nice career, recording four goals and two assists in his last four games.

The Europa League is where Gouiri has really showcased his talent, scoring in all of Nice’s opening four group games. And statistically, Gouiri has been Nice’s best attacking threat this season achieving the highest goals + assists per 90 numbers of any regularly involved player in the squad, (Swiss U21 Dan Ndoye’s number are slightly higher but has played 1350 less minutes). However, this output should arguably be higher, as he has achieved an xG of 8.9 for his 6 goals (including 2 penalties – his NPxG is 7.4). Gouiri also has more than double the number of shot creating actions (an offensive action that leads directly to a shot, such as a pass, dribble or drawing a foul) compared to any of his teammates, and only Romain Faivre has produced more in Ligue 1 out of league’s Under-23s. 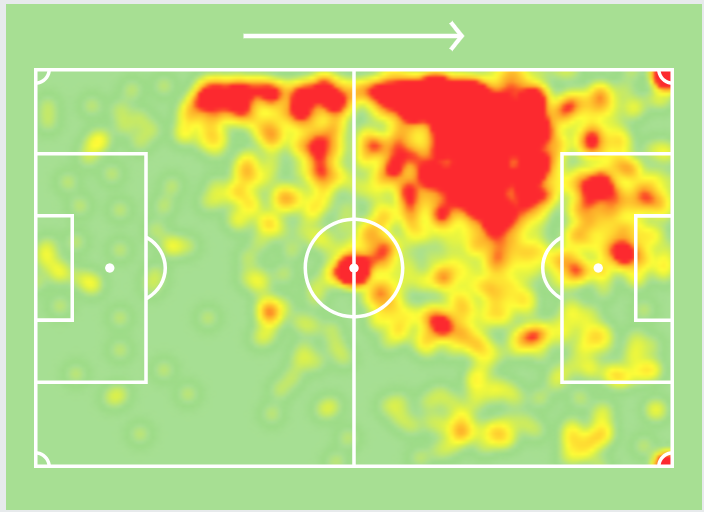 Gouiri’s goal at home to Lens this season perfectly encapsulates what the forward offers Nice going forward. Playing as a left winger in this game, he takes up a really narrow position (almost functioning as a second centre-forward in the opening picture), forcing Lens’ full-back to follow him inside. He sticks close to Dolberg and picks up his lay-off, before spreading the ball wide into the unoccupied space. Nice’s attacking players flood the box, except for Gouiri who delays his run, giving him time to set himself on his right foot (in the third picture, receiving the ball on the edge of the box) and caress the ball into the top corner, out of the reach of the goalkeeper.

Later in the same game, Gouiri demonstrates a similar finish – pushing the ball out of reach to the goalkeeper’s left with power and accuracy – however the buildup play is very different. Nice’s high press wins the ball in Lens’ defensive third, and the ball falls to Gouiri in space. His close control on his right foot makes it very difficult for the defender to get close to him to try and tackle him, allowing Gouiri to continue advancing until he enters the penalty box, making dispossessing him even more tricky. By the time the defender does attempt to close him down, Gouiri has already shifted the ball to his right and unleashed his effort.

This is possibly the finest example of Gouiri’s ability to execute fast-paced link-up play and an improvised finish. Playing as an inside forward on the left, he’s fed the ball thirty yards from goal, driving forward before playing a one-two with his teammate, but the ball back to him arrives at head height. However, he’s able to readjust his body position, take a touch with his head and then lift the ball over the keeper, as he’s unable to wait until the ball has dropped to strike it properly.

An aspect of Gouiri’s game that could be improved upon is his ability to compete in duels with defenders. Gouiri’s close control means defenders rarely run alongside him to try and tackle him, however, when caught in this situation he is easily muscled off the ball, as seen in the example above when he’s played through on goal but the defender tracks back and forces him to take an off-balance shot. He’s one of the most frequent pressers in the Nice squad, however he has a low success rate. Not unusual for an attacker, but when he does get into the position to win the ball back, he still struggles to outmuscle his opponent.

In the French set-up, Gouiri also occupies an inside left position, with either Celtic’s Odsonne Edouard or Lille’s Jonathan Ikoné playing as the central striker. Ikoné’s preference to drop deeper to collect the ball allows Gouiri to play as an auxiliary striker at times, and in the above example has occupied the space vacated by Ikoné. Gouiri times his run to stay onside, looks up to see what available options he has in the box, and then plays a neat pass across the box with his outstep to dissect the two defenders and provide his teammate with a simple finish.

In this final example, Gouiri demonstrates several skills that are infrequently utilised but clearly exist and could be developed further. In Nice’s match against Bordeaux, Gouiri is fed the ball on the right wing just inside the opposition’s half. The space in front of him allows him to progress the ball forward, and the full-back expects Gouiri to cut inside and therefore shows him to the outside – Nice rarely cross the ball, so this would normally be the correct course of action. However, Gouiri is happy to stay on his right foot (he rarely uses his left) and so knocks the ball past the defender and shoots with his laces and hits the bar. The above examples have proved just how strong Gouiri is cutting in on his right, but there’s certainly potential for Gouiri to be more adaptable and switch wings on occasion, although as his heat map earlier in the article shows, he very rarely attempts this.

And Finally On France…

Former Lorient manager Sylvain Ripoll has his work cut out trying to select a 23-man squad from France’s available players at this age group, let alone his starting XI. Gouiri’s teammate and France’s under-21 captain Jeff Reine-Adélaïne has suffered a second ACL injury in just over a year and so his chances of playing for his country this summer are over. Hertha Berlin’s on-loan Arsenal midfielder Mattéo Guendouzi is likely to take the armband in Ripoll’s 4-3-3 system, with the likes of Alban Lafont, Colin Dagba, Jules Koundé, Boubakary Soumare, Moussa Diaby and Edouard all likely to be involved.

Russia, Denmark and Iceland are France’s opponents in the group stage, and qualification for the knockouts in May/June should be relatively straightforward. The broken up nature of the tournament may make carrying form into the more important matches tricky, but the quality in the France squad means that shouldn’t be a problem.