With a return of just two goals and a single assist in the Serie A this season, on paper you would think that Scamacca is struggling to have an impact during his first full season in the Italian top flight. But links to Juventus in January suggests there’s a lot more than meets the eye to the giant Italian striker, who has already had a journeyman career at the age of 22. An impeccable record at international level has given fans a glimpse of his capabilities, and Genoa are reaping the rewards of Sassuolo allowing the forward to venture out on another loan spell this season.

Scamacca left Roma’s academy for PSV Eindhoven aged 16, spending eighteen months in the Netherlands developing with the U19 side and Jong PSV in the Dutch second tier, before moving to Sassuolo on loan. Scamacca impressed enough in Sassuolo’s Primavera side to earn a permanent move back to Italy in 2017, and was rewarded with his first taste of Serie A action in the first half of that season, before moving to Cremonense in Serie B on loan. He recorded a single goal during fourteen appearances, and struggled for consistency in a side that won once while Scamacca was on loan there, going from 5th to 16th in the table in four months.

The following season didn’t go much better, heading back to the Netherlands – this time on loan to PEC Zwolle – where he failed to score in 10 appearances, accumulating just 315 minutes, before picking up a knee injury and spending the rest of the season in Sassuolo’s Primavera setup. 2019/20 finally give Scamacca the game time and consistency he craved, with a full season on loan at Serie B side Ascoli providing the forward a platform to showcase his talent in Italy on a weekly basis. Thirteen goals in all competitions was a decent return in a side that ended up finishing in mid-table, and led to his latest loan spell at Genoa.

“We realised straight away that keeping Scamacca would be a real coup.”

Scamacca functions best as a striker in a front two, whether that’s in a 4-4-2 formation, or more commonly at both club and international level, a 3-5-2. Scamacca’s size makes him a natural target man, although his skills stretch beyond that, and so playing close to a second striker makes use of his ability to hold the ball up and involve teammates around him. Scamacca is one of several forwards that rotate between each other in the starting line-up for Genoa, with Mattia Destro, Goran Pandev and Eldor Shomurodov sharing attacking responsibilities between them, and winger Marko Pjaca occasionally used as an auxiliary forward. Genoa have spent much of the season in the relegation zone, although an upturn in form in January coincided with Destro and Pandev starting together. Genoa haven’t recorded a win in their last five games, but Scamacca only started once in that time – a 3-0 defeat to Inter Milan.

Scamacca’s defensive input isn’t something necessarily associated with taller strikers, although his height doesn’t correlate with his mobility. He’s one of the most prolific tacklers in the final third when compared to other Serie A attackers (0.46 tackles / 90 mins), and wins a high proportion of his aerial duels (3.01 duels / 90, with a success rate of 70%). He’s also above average in the league for tackles, shots blocked, clearances, and successful pressures. It’s an indictment of his high work rate, although also indicative of Genoa’s poor league position that Scamacca has to do more defending than a lot of forwards.

Scamacca doesn’t tend to carry the ball when in possession, sitting in the bottom 25% of forwards for attempted dribbles, however, he has a very high success rate when he does choose to dribble (66.7%). He completes less than 70% of his passes, something that needs to improve, especially if Genoa continue to play two up front meaning both forwards have to take more responsibility in possession and contribute to attacks, although Scamacca is adept at long passes and particularly enjoys switching the ball from one side of the pitch to the other.

Genoa’s attacking output has been mediocre at best this season, so comparing Scamacca’s stats to his teammates doesn’t provide a huge amount of context. His one assist comes from an xA of 1.1, and his xG of 2.9 means he’s slightly underperforming this metric. He’s taken the joint most shots in the squad alongside Destro, but has a much poorer xG, suggesting that the quality of the shots he’s taking and the position of these shots is an aspect of his game he needs to work on. 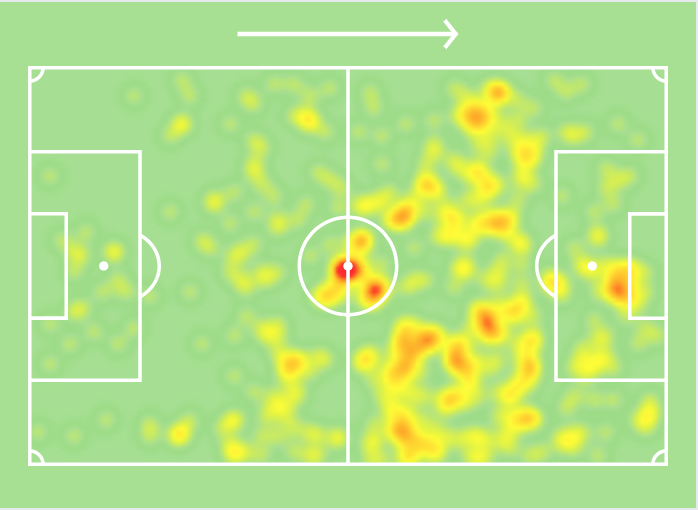 The fact of the matter is, even if his underlying numbers haven’t been world beating this season, there’s a reason why Scamacca has attracted the interest of Juventus and why Genoa’s management were so pleased that any bid for him was rejected; he passes the eye test. Watching Scamacca in action you can see his undoubted talent, particularly when playing for Italy when his goalscoring record throughout the age groups has been eye-catching.

Some of Scamacca’s strengths and weaknesses can be summed up neatly in this one scenario. He’s in possession in the opening picture and is comfortable linking up with Genoa’s midfield with his back to goal. He turns after laying the ball off and finds space on the left-hand side of the box, drifting away from Roma’s defenders. His decision making is poor though, he fails to properly assess the situation he’s in and chooses to shoot with the outside of his right-foot, meaning the spin on the ball is always going to take it away from the far post. Ideally, Scamacca would drive to the byline before cutting the back ball into the box with his left-foot allowing his teammates to flood the box, but his reluctance to use his weaker foot has meant a chance has been wasted.

This next example highlights what might have happened if the same scenario had taken place on his stronger side. The ball is crossed to Scamacca but it’s behind him and way too far out from goal to ever challenge the keeper, however, he loses the duel anyway. The clearance falls to a Genoa player and Scamacca has already peeled out to the right to create space. The ball is played into Scamacca but he still has his back to goal, so has to let the ball run across his body, and then he has to shoot first time to avoid the angle being narrowed further and the Sampdoria defender closing him down. His awareness of where the goal is and his confidence in his right-foot are vital to this goal being scored and demonstrate some of his key strengths.

Against Roma this season, Scamacca played alongside Marko Pjaca in a front-two, and spent much of the game occupying Chris Smalling. Genoa are progressing possession through their midfield, and so Scamacca holds his run and offers an option into feet, while Pjaca turns and runs towards goal. This creates space for Scamacca when the ball is played into his feet, allowing him to quickly turn, while Pjaca’s run has stretched Roma’s defence, creating space for a through-ball. Scamacca doesn’t panic, and after looking up to assess his options, threads his pass perfectly between the centre-backs to break the offside trap.

In Italy under-21’s game against Luxembourg during qualifying, Scamacca once again demonstrated his composure in front of goal, and the strength of his right foot. A corner has been whipped in towards the near post, while Scamacca as one of Italy’s biggest threats from set pieces occupies the penalty spot. The ball is flicked on, given Scamacca very little time to react, however, his first touch on his chest is exceptional and he’s able to adjust his body to strike the ball on the volley through a crowd of players into the unoccupied half of the goal.

If Scamacca continues to utilise the strongest aspects of his game, his output should improve over the course of this season, and the under-21 Euros should give him a good opportunity to find some form, however, there are clear gaps in his skillset that need to be addressed if he’s to reach his potential. His decision-making can improve, especially when choosing when to shoot and the weakness of his left foot can be addressed. Having some consistency will also benefit Scamacca, although it’s not certain whether he’ll stay at Genoa next season, return to Sassuolo’s first team or move on once again.

And finally on Italy…

Italy’s pedigree at under-21 level internationally means they’ll always go into a tournament as one of the favourites, although their last success at this level was at the European Championships in 2004. Trying to predict who will make the Italian squad is tricky enough, let alone a starting eleven as Paolo Nicolato included 56 different players in ten qualifying match day squads. Nicolato preferred a 3-5-2 system towards the end of qualifying, giving Scamacca a good chance of being involved, while Wolves’ (and currently Valencia’s) forward Patrick Cutrone could be the man to play alongside him.

Marco Carnesecchi should be given the nod in goal over Michele Cerofolini, while Enrico Del Prato, Marco Sala and Matteo Gabbia featured most frequently in defence. No midfielder started more than half of Italy’s games in qualifying, so predicting the likely midfield three is next to impossible. Spain are likely to be Italy’s toughest opponents in Group B, but the Czech Republic should not be underestimated, although they should have enough quality to see off co-hosts Slovenia in their final game.