Sutton Coldfield in Birmingham is more of a rugby union town than football. The two rugby clubs play much higher up their respective sporting pyramid than Sutton Coldfield Town FC, and the town’s most famous football son is goalkeeper Carl Ikeme. However, many people from the Birmingham area will be unaware that a 17-year-old senior international hails from the town and has been linked with the biggest clubs in Europe. Ísak Bergmann Jóhannesson made his senior international debut against the country of his birth in the Nations League last year, and although he had previously said in interviews that he would only ever represent the country of his ancestors, there’s a chance that Southgate and co. may regret not trying to persuade the playmaker to give the Three Lions a chance.

Jóhannesson’s family history makes his early call-up no surprise, being the third generation from arguably Iceland’s most prolific footballing family. Guðjón Þórðarson – his grandfather – managed Stoke, Barnsley, Notts County and Crewe Alexandra, his father Joey Guðjónsson and uncle Bjarni Guðjónsson will both be familiar to English football fans, while another uncle – Þórður Guðjónsson – is widely considered the most talented family member after his spells in Spain and England. His cousin Oliver Stefansson followed him to current club IFK Norrköping in 2019, aiming to help Jóhannesson make the extended family proud. To say he has big boots to fill would be an understatement, but at this point in his career eclipsing the achievements of his forefathers isn’t out of the question.

Jóhannesson came through one of the most prestigious academies in Iceland (after spells at Man City and Burnley among others as a child) ÍA in Akranes developed the likes of Arnór Sigurðsson (CSKA Moscow), Björn Sigurðarson – (Molde, formally of Wolves) and former Bolton full-back Grétar Steinsson, as well as uncle Bjarni. He was given his senior club debut at the age of 15 by his father in their final league game of the season, before Norrköping came calling in the off-season, and his development since then has been full-throttle.

“I’ve never experienced anything like it, the interest is completely wild. It’s such a battle for the young talent. You can tell by all the calls and requests we get. When there’s hype around a player, the others want to join in.”

Jóhannesson is equally comfortable playing as a left-side central midfielder or on the left wing for Norrköping and has one of the best left feet in the league. Quick off the mark and willing to put a shift in both offensively and defensively (so much so that he’s made cameos at left-back this season), Jóhannesson does not look out of place in Norrköping’s senior set-up despite his tender age.

Ísak Bergmann as he is known in Iceland (surnames are not usually referred to due to how common certain names are in the country) has an impressive record at international level considering he’s about to turn eighteen. 22 appearances across the U17, U19 and U21s with a return of 11 goals earned him his senior call-up by Erik Hamrén in his final game as Iceland coach.

Jóhannesson mainly functions in the opposition half, linking play between the front three and his deeper lying midfield counterparts when playing as a central midfielder. However, when he’s deployed as part of a front-three, he tends to hug the touchline, looking to either deliver a range of different crossing options into the box, or when possession has switched to the other flank, either taking up a position at the back post, or drifting deeper to pick up the ball on the edge of the box.

His positioning is exceptional, and he reads the game so well that more often than not you wonder how he so frequently pops up exactly where he needs to be in attacking scenarios. This is a major contributor to his 12 G+A (goals + assists) in the league last season, which puts him in the top 20 players in the Allsvenskan for this metric. An area that Jóhannesson will be looking to improve is his dribbling ability. He only recorded 0.3 successful dribbles / game last season, which on the face of it isn’t a low number for a player who has played a number of games on the wing. Jóhannesson’s role as a wide playmaker suits his skillset and Norrköping, but if a bigger club swoops him up in the near future, they’ll expect him to be able to drive forward from wide areas as well as bring his teammates into the game. 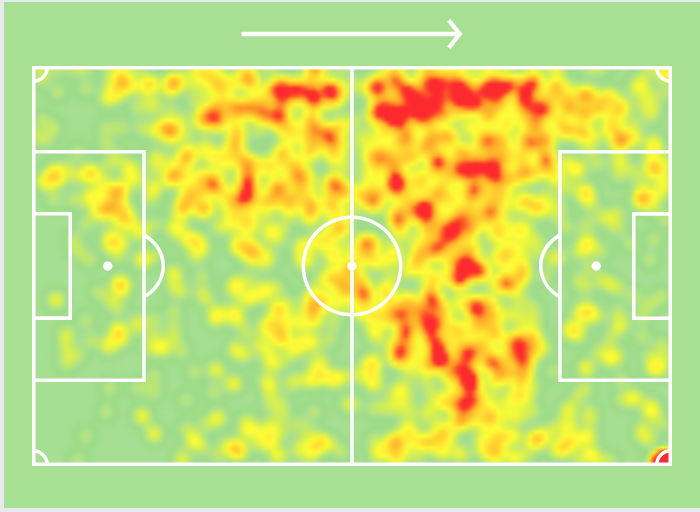 In the example above, Jóhannesson (number 27 in all of this article’s screenshots) is the player just behind the front two in the centre circle of the first picture. He’s occupying the space between Helsingborgs defensive and midfield, and when the pass arrives behind him, he’s able to check him run, and use his balance to avoid being muscled off the ball. He then looks up, and delays his pass so that we can play it straight into his teammate’s path, riding the contact from the defender in the process. The ball splits open Helsingborgs’ defence, and the forward finishes the one-on-one.

Jóhannesson is the man in possession in the opening picture, after a Göteborg attack breaks down, and he plays a neat one-two to take their midfielder out of the game. Playing in a central role in his passage of play, he takes a touch out of his feet, scans the runs of his teammates in front of him and uses the outside of his left foot to curl his pass away from the Göteborg full-back into the path of his teammate, who has time and space in the box to finish. Jóhannesson’s calmness on the ball in attacking scenarios is one of the most impressive aspects of his game, alongside his surprising power which we’ll get onto shortly.

In the reverse leg against Göteborg last season, Jóhannesson displays a level of composure in front of goal rarely seen in players who aren’t natural strikers. Jóhannesson times his run into the box well, and controls a ball chipped over the top into his path with ease, making sure he doesn’t need to readjust his body before shooting. The ball bounces once, and Jóhannesson could have easily panicked and taken his shot then, but instead, he’s aware he has more time than this and lets the ball take an additional bounce so he can compose himself before striking powerfully past the keeper. He has taken the decision to shoot from a more narrow angle in order to make sure his technique is precise.

Possibly the most well-known moment of Jóhannesson’s career so far after the clip of this goal went viral on social media while he was linked with a move away from Sweden, the context behind the goal is also interesting. Picked as a left-back in this game, Jóhannesson (on the ball in the first picture) has dribbled inside and carried on his run into the box. The space between Helsingborgs centre-back and right-back exists as Norrköping’s left winger has stayed high and wide, meaning Jóhannesson can create an unexpected overload. The pass is played nicely into his path, allowing him to let the ball come across his body, before lashing the ball past the keeper under the pressure of two defenders.

In this final example, Jóhannesson (the player on the move in the first picture, crossing the ball from the byline in the second) displays his crossing ability from open play. His teammate plays an improvised flick into his path, and as the only player to anticipate the pass, he gives himself plenty of time to drive towards the box, and then look up to pick out his teammate from the cross. Jóhannesson tends to prefer either driving his crosses low along the floor or floating them into the box – a technique he tends to prefer from set pieces, particularly for Iceland – and in this example, he accurately picks out his teammate by standing the ball up at the back post, giving him plenty of time to run onto the cross with pace and out-jump the opposition.

Jóhannesson will be in no rush to leave Norrköping right now, given he’s still in his teens and accumulating a serious number of senior minutes for someone his age. Likewise, the Swedish side won’t want one of their most important players and arguably most prized asset (former West Ham and Middlesbrough midfielder/forward Sead Hakšabanović might have something to say about that) to leave until he’s had an extra year to push his asking price up even further. Norrköping missing out on a European place on the final day of the season will have hampered this plan slightly, and in that crazy game at the end of the season against Helsingborgs (which they lost 4-3), no one on the pitch was more animated than Ísak Bergmann Jóhannesson. You could see just how much that game meant to him, and one day in the near future, another club is going to inherit a passionate and incredibly talented young footballer.

And Finally on Iceland…

Iceland overcame one of the toughest qualification groups to qualify for the U21 Euros, although this wasn’t without controversy. Iceland’s final game against Armenia couldn’t go ahead due to positive coronavirus tests in their opposition’s squad, leaving Iceland a point behind the Republic of Iceland and below Sweden on goal difference in fourth place. UEFA eventually awarded Iceland a 3-0 win, a result that saw them leapfrog the two sides above them in the group, and displace Poland in the 2nd place teams final ranking.

Since then, manager Arnar Viðarsson has been promoted to the role of head coach with the senior Iceland side, meaning a new coach will have to select a squad and guide the team through a tough group. Viðarsson has said previously in interviews that he will pick the best squad available to him, so the likes of Jóhannesson, Aarhus and under-21’s captain Jón Dagur Þorsteinsson and Bodø/Glimt’s Alfons Sampsted may all be called up to the senior squad for Iceland’s upcoming World Cup qualifiers. The players not given senior call-ups will have Russia, France and Denmark for company in Group C. Iceland have only ever won once at this stage of a European Championships, back in 2011 against Denmark, however Russia are expected to employ a similar strategy of giving young players senior call-ups meaning a shock result isn’t off the cards.

If you enjoyed this, please follow me and From The Halfway Line on Twitter to make sure you never miss another story, or to see more profiles, click here. Stats sourced from TransferMarkt, FBRef and SofaScore. Special thanks to @FotboltiLucas for his expertise for this article.