When Dani de Wit made the switch to AZ Alkmaar from the famed Ajax academy in 2019, there was plenty of intrigue across the Netherlands as to how the attacking midfielder would make the step up to senior football after impressing for the national team’s youth sides without making the breakthrough at the Johan Cruyff Arena. De Wit failed to start a single game in the Eredivisie for Ajax, but it was clear in his final year in Amsterdam that he was too talented to be playing in the second tier for Jong Ajax, averaging a goal or assist every 100 minutes. Ajax would have been tempted to loan de Wit out for a season in the top flight to do some recon on his ability at the top level, but when AZ came in for him, both the club and player knew it was time to move on.

His first season at the AFAS Stadion couldn’t have gone much better, stepping straight into the starting line-up of a young, talented and very exciting AZ side. A side that due to the pandemic were left bitterly disappointed to miss out on the league title on goal difference after they finished with an identical record to Ajax when the league was suspended in March, but with a slightly poorer goal difference. The composition of AZ’s midfield and attack allowed de Wit to settle in and quietly go about his business, while his teammate took the plaudits. Myron Boadu and Oussama Idrissi (now at Ajax) led the goalscoring for the side, and young midfielder Teun Koopmeiners consistently made headlines with his performances in the middle of the park.

Idrissi is the only man who moved on in the summer from the core of the AZ side, replaced by Swedish winger Jesper Karlsson, another young player identified by an ever-improving AZ recruitment team who has already contributed 13 G+A (goals + assists) this season. Unfortunately, AZ have struggled to match Ajax as closely as they did last season this time around, and after failing to progress through the Champions League qualifiers, missed out on the Europa League knockout stage after a mediocre campaign in their group.

“Dani is a midfielder with depth, insight and scoring ability. In addition, this is a boy with a great character, who can be an example for other players.”

If you look at a AZ team sheet, you’ll see de Wit positioned as an attacking midfielder, and he’s more than capable of rotating between the other two central midfield positions of Alkmaar’s 4-3-3 with Koopmeiners and Fredrik Midtsjø. However, in practice de Wit is more of a second striker, tending to play on the last man alongside Myron Boadu, giving AZ a direct aerial threat in the box, or a target man from goal kicks and deep long balls. De Wit is a touch over 6 foot tall, so my no means a giant, but wins a considerable amount of headers and possesses a great deal of strength, making it difficult for defenders to wrestle him off the ball or overpower him in aerial duels.

Dani de Wit has high level of natural fitness, although when playing as a second striker he could improve the number of runs he makes in the final third, although as he doesn’t possess a real burst of acceleration, these runs would be used to create space for his teammates. But de Wit uses this stamina and high work rate to press opponents endlessly, doing so more than any other player in the AZ squad this season, despite being injured for more than two months. That injury coincided with AZ being knocked out of the Europa League after an unexpected defeat to Rijeka, losing to Ajax twice (once in the league and once in the Dutch Cup) and falling ten points behind de Wit’s former club in the Eredivisie, although the gap was considerable before his injury.

Where de Wit has really shone is for the Dutch U21 side, who dominated their qualifying group for the upcoming U21 Euros. The Netherlands team scored four or more goals in eight of their ten games, including two 7-0’s, a 6-0 and two 5-0’s. Dani de Wit ended the campaign as the Dutch side’s top scorer with ten goals in seven starts, and was handed the captain’s armband in his final game against Gibraltar. Dominating sides with so much ease meant de Wit could play in a similar role to the one he’s deployed in for AZ, and his relationship with Boadu and Calvin Stengs has really helped on this occasion. So powerful in the air, de Wit dominates against his younger peers, and is given plenty of opportunities. 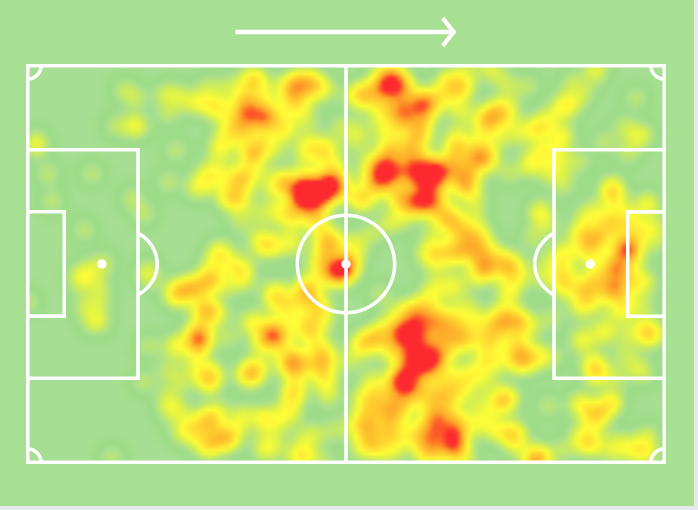 An example of de Wit’s movement in the box is summarised in the pictures above. De Wit (the man in the centre of the six yard box in blue) has taken up a centre forward’s position in the box anticipating a low cross into the box. He’s happy to take up a space as close to the goal as possible when the ball reaches the byline, as he knows the ball has to be cut back, which suits his strength of using his right foot, as opposed to a cross drilled in front of him that would suit a shot with his left. He makes the run to the near post, using his strength to give himself half a yard of space from the defender, while also keeping himself onside, and then swivels neatly to beat the ‘keeper to his right. This style of finish is one of de Wit’s specialities, the above example against Napoli in the Europa League this season is almost a carbon copy. De Wit once again takes up a position in the middle of the box, and then makes a dash to the near post to beat Koulibaly to the ball, and then squeezes the ball from the tightest of angles out of the reach of the goalkeeper.

Against ADO Den Haag, AZ have created an overload on the left wing, and the right-back picks out the left forward with an accurate switch of play. De Wit is already occupying a centre-back alongside Albert Guðmundsson, not only anticipating the ball will be crossed into the box, but also forcing ADO’s full-back to defend the two versus one on his own initially. The winger cuts inside, while Guðmundsson loses his marker forcing the defender watching de Wit to cover him, giving de Wit space at the back post. The cross picks him out, but instead of trying to hit the target, he attempts to square the ball to Guðmundsson, but miscues his header, allowing ADO to clear the ball. Everything de Wit does in the build-up to this chance is correct, but his decision making at a pivotal moment lets him down.

In the Netherlands qualifying campaign, de Wit also played in the second striker role, which helps to explain his high goal tally. Wearing the armband at the top of the box in the first picture, de Wit and Boadu have both reacted fastest to the quick free kick, and de Wit is able to finish the chance on the stretch ahead of the Gibraltar defender. He also scored a controlled right-foot volley in this match, but the defending and goalkeeping could be called into question, as de Wit is easily able to break the offside trap and then his finish is within the ‘keeper’s reach.

All in all, de Wit offers AZ an alternative forward option, as Boadu, Stengs and Karlsson are able to beat players with their dribbling ability and pace, de Wit provides a more physical challenge. His passing and vision can’t be underestimated, although he’s got one of the worst pass completion rates of any attacker in the squad, but this expected from someone playing so high up the pitch. De Wit’s future is at AZ for now, but another season of first team action, combined with an improved goals + assist rate, could see de Wit on the radar of teams in England, Spain and Germany.

And finally on The Netherlands…

As we’ve already mentioned, the Netherlands were prolific in qualifying, although they were placed in one of the weakest qualifying groups aside from Portugal. The main event will be more challenging, but they still go into Group A as favourites ahead of a decent if not spectacular crop of Germans, Romania and hosts Hungary. De Wit and Boadu are likely to be joined by a combination of Justin Kluivert, Javairô Dilrosun, Ferdi Kadioglu or Cody Gakpo on the wings, while Koopmeiners will join them for this campaign despite already receiving a senior call-up.