If you were going to curate the perfect youth career for a player to maximise their development, you would be hard pressed to do better than Porto’s treatment of centre-back Diogo Leite. Leite made his debut in the UEFA Youth League as a 17 year-old, before completing an entire Youth League campaign the following year alongside a full season with FC Porto’s B team in Portugal’s second tier. He started to make waves outside of Portugal in 2018/19, when he led Porto’s youth side to their first Youth League title, defeating a Chelsea side in the final that included the likes of Marc Guehi, Tariq Lamptey, Billy Gilmour, Conor Gallagher and Daishawn Redan. He also made his Porto first-team debut that year, including 90 minutes in the Champions League against Galatasaray. However, in the last eighteen months, Leite has struggled to kick on as expected.

Legendary Portuguese centre-back Pepe joined Porto in January 2019, and Leite failed to make a single first-team appearance for the rest of the season, and although his minutes increased the following season, Leite has failed to kick on as expected, and the recent criticism from manager Sérgio Conceição means rumours from previous transfer windows that the centre-back may leave his boyhood club are only likely to get stronger. In fact, one report suggests that his time at the club is over as long as Conceição is still in charge.

“He’s the best centre back in Portugal”

Leite was strongly rumoured to be joining Valencia last summer (so much so that a fee had apparently been agreed), along with Southampton, Lille and clubs from the Netherlands, Germany and Turkey – teams with very well-respected recruitment policies – which shows how highly rated the young defender is. This isn’t the first time a young centre-back has struggled to make the step up at Porto. Diogo Queirós was Leite’s partner all through the academy at Olival, and captained the UEFA Youth League winning side. He’s also Leite’s partner for Portugal U21 side but as Porto have struggled to integrate one young centre-back into the squad, Queirós realised both of them stepping was also very unlikely, so made the move to Famalicão.

Fundamentally, Leite has developed into a well-rounded, modern centre-back. Leite is comfortable in possession and carrying the ball if necessary and capable of playing both short and long passes. He’s also very adept at positioning himself correctly when defending, although has a tendency to drop deeper from crosses or long balls slightly earlier than his teammates which can cause issues when trying to play forwards offside and suggests that he can improve his communication. He’s a dominant presence in the air and a threat in the opposition box, although fails to convert as frequently in he should. 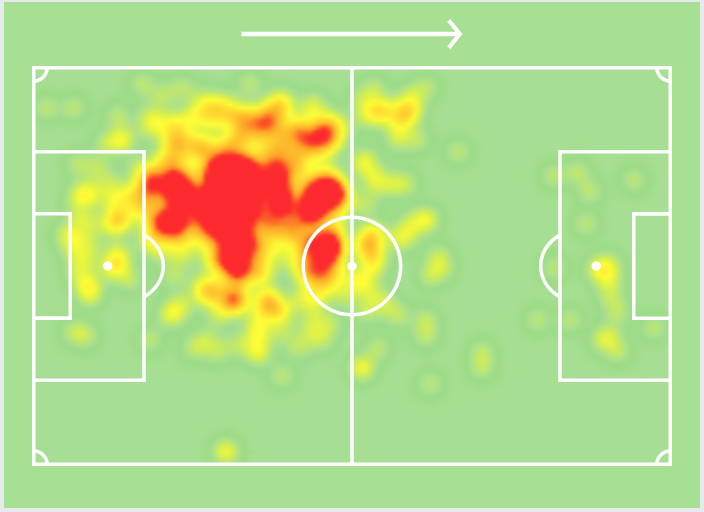 In the example above, Leite (Porto no. 4, the middle defender in the first picture) is chasing back as Raheem Sterling races the Porto left-back to the ball. His teammate at the bottom of the picture gives up the chase, but Leite continues to track back and when Sterling reaches the ball first, is in a position to cover the goalkeeper who has to smother the shot. Leite is then able to square up to the Man City attacker, forcing him to hesitate when taking his shot and allowing a covering Porto player to thwart his effort.

In the same game against Man City, Leite demonstrates some of the key defensive skills he’s developed that show his potential. Man City’s corner is initially cleared, and as Leite follows his man out of the box, he realises he’s out of position when looking across the back line. In the second picture, you can see Leite has fallen back into Porto’s back line, but Man City work the ball to Rodri and Leite has to quickly change direction, adjust his body position to force Rodri to look wide and close him down. He also has the awareness to put his arms behind his back to minimise the risk of giving away a penalty, knowing that Man City tend to drill cross into the box. Once Rodri has played the ball out wide, Leite sprints back into Porto’s back line and throws himself at the cross, knowing that if he’s able to get any deflection on the ball it’s unlikely to risk being an own goal. His positioning, awareness, acceleration and reading of the game against a world-class attack in this scenario are what make Leite such an exciting prospect.

The scenario above and below (both in the Man City game) show aspects of his game that could be improved, although any criticism aimed at Leite need to be balanced against Conceição rotating him in and out of the side. Above, Leite needs to take a glance to his left, if he does, he’ll see an unmarked Sterling on the edge of the box, and would be able to close him down, if not intercept an attempted pass. Luckily, the Man City player continues to drive into the box, and instead Leite is able to make himself big and block any shot towards the far post, forcing Bernardo Silva to try and beat the ‘keeper at his near post.

In the above example though, Leite makes two key errors that would have led to a Man City goal had VAR not intervened. Porto have held a high line against Man City when the ball is out wide, however, when the player cuts inside, Leite takes this as a prompt to drop deeper. This allows Gabriel Jesus to make a run in behind and stay onside, and because Leite is the only defender capable of clearing the cross, its imperative he wins the header. However, his body position is all wrong, and he ends up overrunning the cross, allowing Jesus a free header. Leite needs to better communicate his decisions in situations like this to allow Porto’s defence to drop as a unit, although he would also have benefitted from a shout from one of his teammates to stay high. 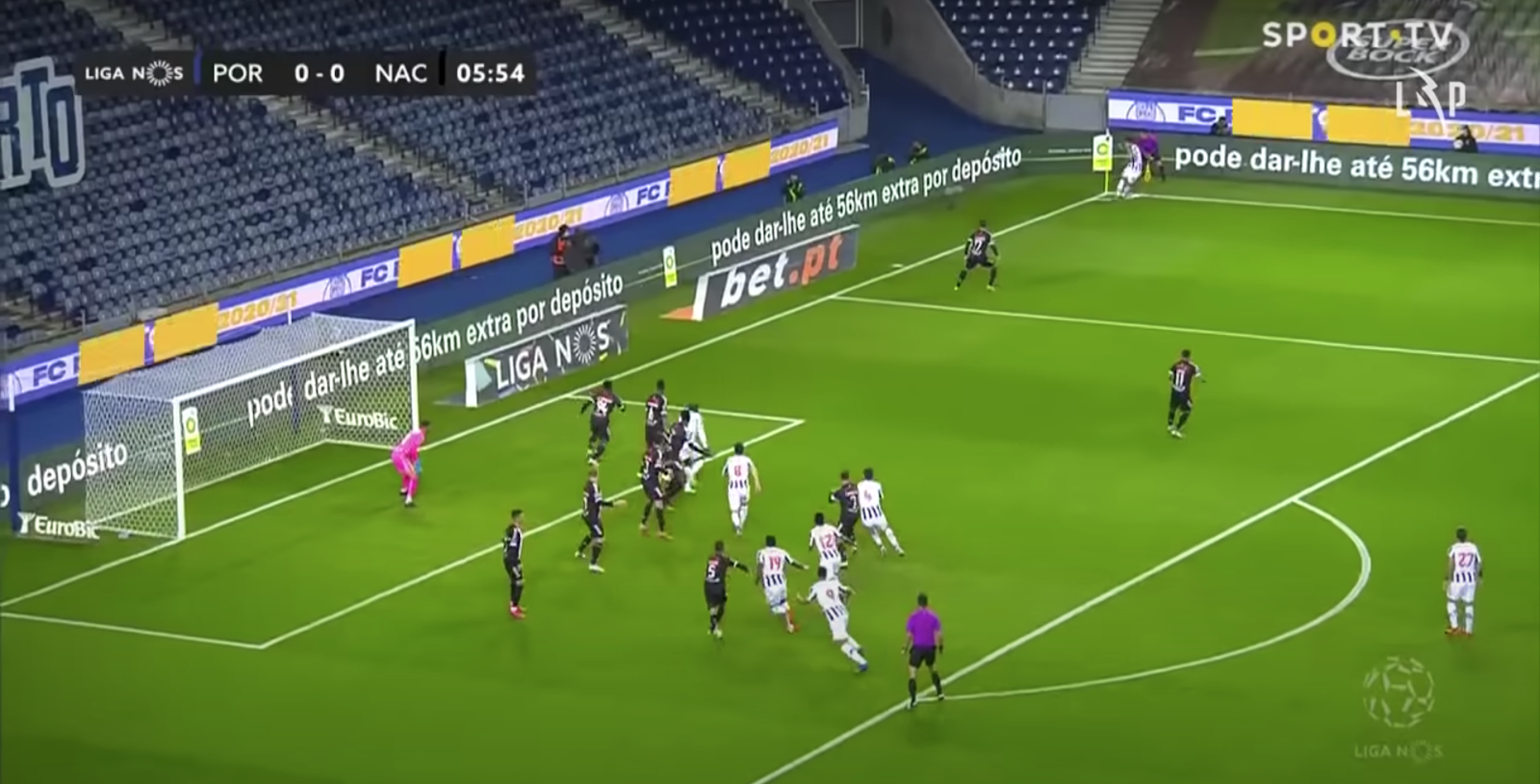 In a league game against Nacional, Leite shows his prowess from attacking set pieces. He’s being tightly man-marked in the first picture, but when the ball is delivered into the box into an area that Leite can attack, he jumps earlier than the defender to make sure he’s not pinned and unable to rise to challenge for the ball. The cross is in front of him, but Leite is able to contort his body while off-balance to still win the ball with a strong header, that unfortunately is straight at the ‘keeper, otherwise this could have resulted in a goal.

Leite’s (in the middle of the centre circle in picture 1) all-round defensive attributes are demonstrated in this final example. A long ball from the ‘keeper is aimed at Nacional’s forward, but Leite once again jumps early and wins the header. The forward’s positioning isn’t brilliant, but Leite plays the ball rather than the man, otherwise he would have been drawn underneath the pass. His header lands at the feet of a Nacional player who takes a poor touch, and so Leite has to adjust his balance to go from back pedalling back into positioning to jumping onto the front foot. Leite times his slide tackle well, so well in fact that it puts Porto into an attacking position, the ball is won upfield and his side double their lead.

Leite is clearly a very talented centre-back who is now being held back in his development by his lack of game time at Porto. Conceição’s lack of the faith in the young defender over the last 18 months has been the biggest hurdle Leite has had to overcome in his career so far, but the attributes he’s displayed should be enough for a mid-table Premier League side or a team competing in Europe in one of the other big 5 leagues to take a chance on him, and if Porto want to get rid, they could pick up a player for a comparative bargain.

And finally on Portugal…

Portugal go into the U21 Euros as one of the favourites, and should be relatively confident of progressing through March’s group stage. A win in their opening game against Croatia should give them a buffer going into the crunch match against England, and they won’t want to go into their final group game against Switzerland needing a win, who have another strong crop of players coming through.

The Porto connection in defence for Portugal gives the side a very strong base, although goalkeeper Diogo Costa is in a similar position to Leite in terms of game time at club level, with former teammate Queirós likely to line up alongside Leite. Valencia’s Thierry Correia and Manchester United’s Diogo Dalot will likely flank them as part of a back-four. Wolves’ on-loan midfielder Vitinha will play in a midfield three alongside Monaco’s Florentino Luiz and possibly Spurs flop Gedson Fernandes. Jota (not the Liverpool one), Monza’s Dany Mota and AC Milan’s Rafael Leão could complete a very strong Portugal side, but senior call-ups are on the cards for a few of these players, and that could disrupt one of the qualifying stage’s most settled sides.