It’s no longer an uncommon route for young footballers with family ties to the Balkans to represent Switzerland. Granit Xhaka, Xherdan Shaqiri and more recently Bećir Omeragić were all born in Switzerland but their parents originate from Kosovo and Bosnia respectively. Toni Domgjoni is the latest player to march that path, although the young midfielder was born in Croatia, and emigrated to the Alpine state at a young age. He has since shown immense loyalty to the club that his family settled in: FC Zürich.

FCZ are a side on the rise under new manager Massimo Rizzo, but their fans still pine for the success of the late 2000s, where they achieved three Super League titles in four years. Since then, FC Basel and Young Boys have become the dominant forces in Switzerland, with the latter already virtually guaranteed another league title. However, Rizzo has taken Zürich from bottom of the table in October to just outside the European spots, and it would be a fantastic achievement if he could guide one of the cities two top-flight sides (the other being Grasshoppers) to the newly-created Europa Conference League.

One of the players Rizzo has helped elevate to another level is Domgjoni. Traditionally a defensive midfielder, Domgjoni is comfortable as the deepest midfielder in a central trio, or playing slightly further forward as a six in a 4-2-3-1, although he is occasionally asked to screen a back three, flanked by two wing-backs. Although Domgjoni is only 22, he is already one of Zürich’s longest serving players, helping guide their U18s to an Swiss U18 Championship for only the third time in their history in 2015/16. Their UEFA Youth League campaign side the following year contained current Sunderland defender Arbenit Xhemajli and Domgjoni’s Swiss under-21 teammate Kevin Rüegg, however, they failed to progress through the qualifiers.

“Domgjoni has been operating at a consistently high level since the autumn.”

Domgjoni displays a lot of the attributes necessary to be a successful number six in the modern game. He has a very high work rate, especially in his own half of the pitch where he tends to prefer a conservative approach when Zürich don’t have the ball and therefore not advancing too far up the pitch too often. Defensively, Domgjoni’s anticipation is one of his key strengths, as well as his tackling – an aspect that has improved this season as the number and rate of ground duels he’s won this season have risen (3.0 won w/ 49% success rate in 2019/20, compared to 3.5 won w/ 63% success rate in 2020/21). When Zürich are in possession, Domgjoni’s strong technical skills, including his first touch when under pressure, mean he can move the ball quickly between the lines to bypass high-pressing sides. Domgjoni’s positioning is an aspect of his game that he can continue working on, as on occasions he can be caught the wrong side of attackers in the final third, forcing him to either foul the player to avoid a goalscoring situation or let the player go and rely on the intervention of a teammate.

At international level, Domgjoni has developed a strong relationship with Genk midfielder Bastien Toma. Toma is a slightly more progressive central midfielder, and contributed a goal and seven assists during Switzerland’s qualifying campaign, but he was allowed to play further up the park due to Domgjoni’s discipline within the system. Toma’s performances during the 2019/20 season earned him a move from FC Sion to KRC Genk, and it would not be a surprise if Domgjoni was to make a similar step at the end of this season. 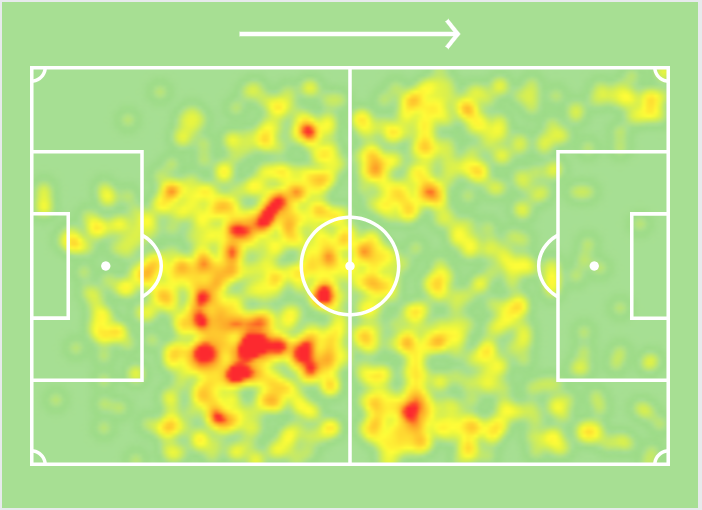 In the example above, Domgjoni (wearing number 14, playing the pass back to the throw-in taker in the opening picture) scores a consolation goal against top of the table Young Boys. Not at fault for any of the four goals the opposition have scored up to this point – although he could have taken up a more conservative position considering how quickly and effectively Young Boys can hit teams on the counter – Domgjoni has drifted out to the left to support a rare Zürich attack. He receives the ball back from his teammate and opens up his body, before shooting. The angle of the shot favours a right-footed strike, and he chooses to hit the ball with power, curling the ball over the keeper, using the natural dip on the strike to keep it out of his reach. It’s a technically accomplished finish, and shows what Domgjoni is capable of in more advanced areas when given time and space.

Domgjoni (receiving the ball from the no. 10 in the opening picture) shows his anticipation by making a direct run past Servette’s midfield into space. He’s not the fastest dribbler, but uses his balance and strength to hold off the defender, and is then plays a perfectly weighted pass with the outside of his foot into the pass of the striker, bypassing the defender coming to close him down. Domgjoni’s excellent close control makes passages of play like this possible, although he tends to execute short, sharp passes like this to beat a team’s high press, rather than in the final third.

Domgjoni once again demonstrates his composure and high technical ability in this next example. On the ball in every picture, he receives a throw-in at an awkward height, but manages to lift the ball over the first defender and then control it in one motion. This allows him to knock the ball past the second defender, who’s body position is incorrect and cannot adjust quickly enough to Domgjoni moving the ball past him. He’s then able to get his head up and drive towards the box, and he can see that he has numerous options in the box. He chooses to pick out the striker on the penalty spot, who finishes with aplomb.

Once again, Domgjoni’s technical ability results in Zürich scoring in the next example. In the opening picture, he’s running slightly in front of the player on the ball, but his body position means he’s able to collect the ball and continue driving forward if he receives the pass. Instead, the ball is played into the feet of the striker with his back to goal, but Domgjoni continues running to provide an option, although his run does crowd the space around the forward. However, the deflected, flicked pass bobbles into Domgjoni’s path, and he’s able to adjust his body position quickly to control the ball, and then unleashes a powerful volley. The cleanness of the strike as opposed to its direction is what’s impressive about the finish, as although the ball is relatively close the keeper, he’s unable to react fast enough to attempt to make a save.

In this final example, Domgjoni (the player pointing towards the corner of the box in the opening picture) has joined the attack earlier than usual, although the lack of urgency from his teammates means an overload hasn’t been created. As soon as Domgjoni enters the box, he checks his run. This allows him to better control the ball when it’s played into his path, and to give himself half a yard of space from the defender who was tracking his run. The pass into his feet is played at pace from close range, so he has to adjust his feet quickly, but still manages to take a good enough first touch to give himself the opportunity to shoot with his next action. He once again punches the ball with his right foot into the far corner, powerfully curling the ball beyond the reach of the keeper.

And finally on Switzerland…

Relatively few of Switzerland’s under-21 squad have made the move from the Swiss Super League to some of Europe’s bigger leagues. Left-back Jordan Lotomba has joined Nice, top scorer in qualifying Andi Zeqiri made the move to Brighton last summer, although has struggled to make much of an impact, and Alexandre Jankewitz’s progression at Southampton has been aided by an injury crisis at the club, only for the midfielder to make headlines for his early sending off on his debut during their 9-0 defeat by Manchester United.

The squad, however, is very well-balanced and is stronger than the sum of its parts, a trait that the senior Switzerland squad have failed to grasp in recent years. Portugal, England and Croatia are going to make progressing to the summer knockout stage very tricky, but a positive result against the Three Lions in their opening game could throw Group D wide open.