Despite Barcelona’s recent issues off the pitch, their La Masia academy is still regarded as one of the best development centres for young footballers anywhere in the world. And although they’ve yet to uncover a generation that can compete with the likes of Iniesta, Xavi, Busquets et al., there are positive shoots coming through. Ilaix Moriba scoring his first senior goal, Óscar Mingueza stepping up into the first team as a centre-back and the emergence of Ansu Fati before his injury earlier in the season point to positive progress being made. However, their most exciting recent graduate left the club with a grand total of seven senior minutes: introducing Marc Cucurella.

Marc Cucurella isn’t a name many outside of his homeland will be aware of – although he has been linked with Napoli in the past – but the bushy-haired left-sided player is one of Spain’s most exciting young talents. Cucurella spent much of his youth playing as a left-back in Barcelona’s academy teams, including two UEFA Youth League campaigns and a campaign in La Liga2 with Barcelona’s B team, but it was with Eibar and then current club Getafe that he was given the license to play further forward on the wing.

Cucurella’s club history is an interesting one. His loan move to Eibar in 2017/18 included an option to buy which the Basque club happily activated, only for Barcelona to activate their own buy-back clause the same summer. La Blaugrana didn’t learn that summer though, and immediately loaned out Cucurella to Getafe, this time inserting an option to buy for €10m, but without their own buy-back clause. Once again, Cucurella impressed his new club, and once again they exercised that option, but this time Barcelona couldn’t fix their mistake. Given Jordi Alba is coming to the end of his time as a world-class full-back option, Barcelona fans will be wondering whether the ready made option in Cucurella should have been allowed to leave the club this easily, given how well he’s performing in Spain’s top flight.

“However, they do not have the patience that would have existed before and for youth team players, they do not get the same opportunities that they deserve. It tastes bad because when I was in the youth-team, I expected to be trusted more but the need to win outweighs the need to be patient.”

As mentioned above, Cucurella has developed into a very strong defensive left-winger. One of his key strengths is beating players in attacking areas, finding space in the attacking third to drag defenders out of position or create shooting opportunities and winning aerial duels. In fact, according to FBRef, Cucurella ranks in the top 15% of attacking midfielders and wingers in La Liga for successful pressures, tackles (he wins more per 90 mins than other Getafe player), interceptions, blocks, clearances and aerial duels won. If you want a player who can support your defensive effort on the left-hand side, Cucurella is very much your man.

These defensive numbers are unsurprising given the pedigree of his footballing upbringing, and suit Getafe’s high intensity tactical style. José Bordalás’ side tend to attack with speed and intensity, looking to overload teams after sitting back, and although Cucurella has the responsibility to lead these attacks from the left, he does at times drift centrally if he sees space opening up in these areas.

Getafe are on a poor run of form right now, losing six of their last 10 games, and the side’s lack of clinical finishing is holding them back. Cucurella has contributed three goals and one assist so far this season, with only three players contributing more goals + assists this season (all three of these players are currently sitting on five contributions). His poor crossing (he averages less than one accurate cross / game, with a success rate of less than 20%) is an aspect of his game that he could concentrate on improving, although this is nitpicking when it comes to Cucurella, who has been integral to two different La Liga sides before turning 23. 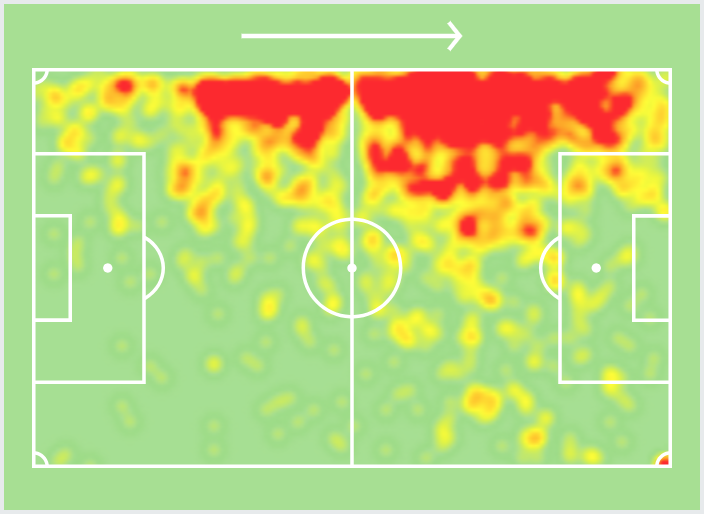 In this first example, Cucurella (in Getafe’s blue kit, nearest the penalty spot) showcases his aerial ability in the opposition’s box. He drifts in between Athletic Bilbao’s right-back and one of their midfield players to find space in the area when the cross is delivered, and capitalises on the poor positioning of the opposition full-back to score a free header at the back post. Despite being relatively unchallenged, Cucurella times his jump perfectly and directs his powerful header into the corner, giving the keeper no chance.

Once again, Cucurella (on the edge of the area in the first picture, leaping in the last) displays his ability to time his run into the opposition area to give himself the best opportunity to win a header unopposed. Getafe have created an overload in the box, making it difficult for Elche’s defenders to effectively defend the incoming cross. Cucurella delays his run slightly so that he’s not one of the players immediately marked, and when the ball is delivered into the box, he’s forced to slightly readjust in the air as the cross is slightly behind him. However, his considerable leap means that despite that fact he’s leaning backward, he can still control his header enough to put it on target with enough power to beat the goalkeeper.

Cucurella displays his directness, strength and determination in this next example. Getafe win the ball high up the pitch on the left, and Jaime Mata plays the ball into Cucurella’s feet. His first touch knocks the ball through the Alaves defender’s legs, giving him no time to adjust his position to try and shuttle Cucurella out wide. Cucurella outmuscles two Alaves players in the box, potentially being fouled, before very quickly adjusting his feet just before reaching the six-yard box to evade a challenge before squaring the ball to his teammate, who strikes first time but puts his shot wide. A weaker winger would have been crowded out before reaching the touch taken into the box, while Cucurella’s ability to instinctively know where his teammates will be when under intense pressure made this chance possible.

In Getafe’s fast counter-attacking system, their forward players are expected to be flexible when it comes to joining attacks. Cucurella’s footballing intelligence makes him particularly useful to his team in these situations, as the above example shows. Cucurella finds himself in a more central area during this attack (playing in a centre forward role in the opening picture), and the ball is shifted out to the right. As soon as this happens, Cucurella sees how narrowly Alaves’ back line has set up to defend the attack and sprints to occupy the space at the near post. The low cross is drilled into his path, and a clever Cruyff flick directs the ball between the legs of the nearest defender and forces the keeper to react quickly to prevent a goal.

In this final example, Cucurella shows just how potent he can be in attacking areas with the ball at his feet. Occupying an inside-left position when the ball is on the right, he fails to trap the initial pass perfectly, but a burst of acceleration takes him past the defender attempting to close him down. Several defenders move to close him down, but not fast enough, and Cucurella unleashes a powerful effort with his weaker foot, giving the keeper no chance of saving his shot. This is an aspect of Cucurella’s game that Getafe may want to utilise further (see how tightly he hugs the left touchline in his heatmap above), especially given their current poor form and lack of prolific goalscorer.

And finally on Spain…

Spain’s route to the knockout stages of the U21 Euros should be relatively straightforward, with Group B containing Italy, the Czech Republic and hosts Slovenia. Luis de la Fuente’s side should be able to overpower the latter two sides with relative ease, with their clash against Italy potentially deciding who wins the group.

Cucurella will captain the side having previously been called up but has yet to make his debut, and may get an opportunity to turn out at Euro 2020(2021) in the summer if for some reason Spain fail to progress to the knockout stages.

De La Fuente rotated heavily in qualifying, so predicting a starting line-up going into the tournament is very difficult, but the tournament could give the likes of Espanyol’s Adria Pedrosa, on-loan Almería defender Jorge Cuenca and Huesca goalkeeper Álvaro Fernández an opportunity to showcase their talents on an international stage, alongside players from the traditional Spanish superpowers.