Victor Nelsson didn’t look phased when he walked out against Manchester United in the quarter-finals of the Europa League last season. After all, it’s a competition he’s grown up with all through his career, even since he was given the armband at previous club Nordsjælland for the first time against Cliftonville three months before his 20th birthday. A Bruno Fernandes penalty ended FC København’s involvement in that competition, and it could be argued FCK’s form hasn’t truly recovered since, but Nelsson was outstanding in that game, completely nullifying Anthony Martial’s involvement in the game. It was telling that Martial won the penalty when he was fouled by Andreas Bjelland in extra-time, finally espacing the young Dane’s clutches.

It comes as no surprise to anyone who had been tracking Nelsson’s career in Denmark that the step up to playing a top English side was well within his capabilities. Originally a central midfielder when he broke through at Nordsjælland, it was only in his second senior season that he first played as a centre-back, as part of a back three for the club from Farum. It ended up being a permanent switch of position, and Nelsson was a staple of Nordsjælland’s back line as they challenged for the title in 2017/18, before eventually finishing third. Unfortunately, the following season was less successful, despite being handed the captaincy, and for Nelsson to continue his development a step up was needed.

However, the skills acquired from playing in the Danish top flight as a central midfielder has made Nelsson an extremely competent ball-playing defender. Very comfortable on the ball, and happy to attempt more progressive passes than most central defenders in the league, Nelsson can be the springboard that FCK launch their attacks from. The conversion from midfield to defence made sense when looking at some of Nelsson’s strongest attributes. A dominant presence in the air with impressive anticipation makes him a valuable asset when defending against sides who prefers long balls from the back or attacking from wide and swinging in crosses. Nelsson has won 2.7 aerial duels / 90 mins this season, with a 75% success rate.

“Both [Nicolai] Boilesen and [Victor] Nelsson have played well inside the center, so there are just many good stoppers, so there is a battle for places.”

Nelsson’s decision making in and out of possession is also a key aspect of what makes him so effective. He constantly scans the area around him, quickly processing where he needs to be and whether or not he needs to stay touch tight to his man, or drop deeper and cover. As an astute passer, he’s also very adept at recognising when opposition players are likely to try and thread through balls behind the defence and shifts positioning accordingly.

As mentioned above, FCK have struggled this season in comparison to recent years. FC København have only finished outside the top 3 once in the last twenty years, and this season might be closest they come to that unfortunate feat again, although a recent upturn in form – that coincidentally has coincided with Nelsson recovering from coronavirus and being reintroduced to the side – means European qualification should be achieved this year. Ståle Solbakken’s time in charge ended after only four league games this season, and the Danish side suffered a shock defeat to HNK Rijeka in Europa League qualifying, and after a slow start, Jess Thorup finally has his side back up to speed. 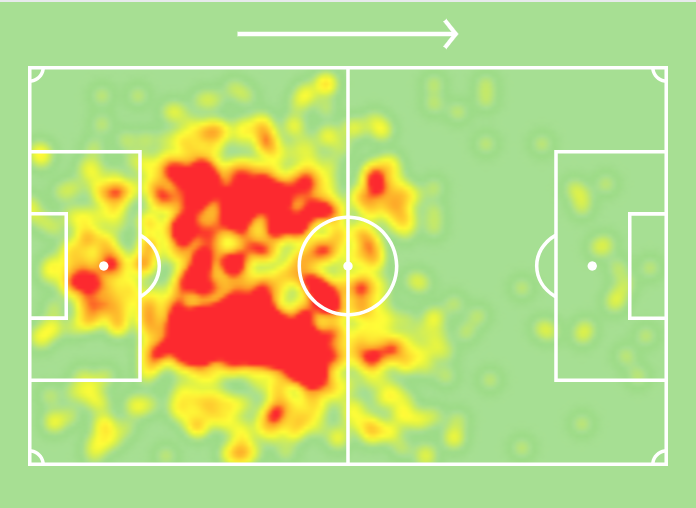 In this first example, Nelsson (on the ball in the opening picture) has plenty of space in front of him. Istanbul Başakşehir are not pressing particularly high allowing Nelsson to take his time in picking his pass. The pass is played into the midfielder at speed and to his left-hand side, allowing him to turn away from the pressing Başakşehir player. This means he’s able to shield the ball and draw he foul. Technically, this isn’t the most difficult pass for Nelsson to play, but the speed at which he gets his head up to assess his options is the important skill displayed.

Another skill that Nelsson possesses that gives FCK an alternative option to progress the ball forward is his ability to hit accurate, diagonal passes. Once again, he starts with a quick glance to check his available options, before striking the ball with power to his teammate. Lyngby were pressing high, putting København’s defenders under pressure, but with one pass Nelsson relieved that pressure, and eventually this resulted in the side’s second goal.

The last three examples all come from København’s defeat to Manchester United in last season’s Europa League. In the sequence of events above, Nelsson (wearing the number 25) displays his ability to cover his teammates who are defending on the front foot, and his anticipation and awareness. His initial position is goal-side of Mason Greenwood, Manchester United’s rotating forwards mean Nelsson and his teammates have to constantly communicate with each other to know who they should be marking, and throughout this passage of play Nelsson is regularly checking over his shoulder to monitor his position. Anthony Martial has picked up the ball in the inside-right channel, and after beating several of Nelsson’s teammates, he progresses into the box. Nelsson has to make the decision to abandon Greenwood to challenge Martial, initially positioning his body to force Martial to dribble away from goal, before timing his sliding challenge perfectly, going in with one foot to minimise the chance of giving away a foul.

In the example above, Nelsson is marshalling Martial while the ball is in the middle third, making sure he’s always in his eyeline when looking at the ball. When the ball is played into Martial’s feet on the half-turn, Nelsson gives himself a couple of yards of space, knowing if he commits to a challenge while Manchester United are committing numbers forward, he risks giving them a simple route to goal as he would have disrupted an organised back four attempting to play any runners in behind offside. Nelsson and his teammates continue to drop, and so when the ball is played in behind, Nelsson is able to use a burst of pace to stay close to Martial and then goes to ground early. This limits Martial’s options forcing him to shoot from an extremely narrow angle, as Nelsson has cut off his options to cut the ball back to a teammate in a stronger position.

In this final example, we see that Nelsson isn’t infallible against top oppostion. When Maguire wins the initial header, Nelsson is caught ball watching, and is unaware Marcus Rashford is on his blindside. FCK’s right-back could communicate better that the man is coming across, but Nelsson isn’t able to close the attacker down fast enough, and only a marginal offside call when the ball is played into Greenwood prevents København conceding.

Overall, Nelsson should be looking to move on either this summer or next to continue challenging himself at higher levels. A move to the Bundesliga where defenders are expected to be ball players would suit Nelsson best out of Europe’s biggest leagues, but there’s been plenty of Premier League interest in the young Dane, and it wouldn’t be a surprise if another English club made their intentions known post-Euro 2021.

And finally on Denmark…

Spanish manager Albert Capellas picked a spine of players during the qualifiers that led them through a tricky qualifying group. Odense BK’s Oliver Christensen played every game in goal, Nelsson was everpresent in defence, while Nikolas Nartey, Carlo Holse, Mikkel Damsgaard, top-scorer Andreas Skov Olsen, Nikolai Laursen and Jakob Bruun Larsen made up the midfield and attack in the majority of their matches, although Skov Olsen and Damsgaard are now with the senior side.

Denmark has a good chance of progressing through their group as runner-up, with France the clear favourites to win Group C. Russia have developed a strong generation of players and will be Denmark’s closest rivals, while Iceland are a potential banana skin in their other match.