It’s never normally a good sign when a player ends up making a permanent move twice in one transfer window. Arsenal Tula would have quite liked to keep hold of Daniil Lesovoy after finally making his move to the Gingercakes permanent after two seasons there on loan, but they ended up doubling their money one month later when Dynamo Moscow came calling. Lesovoy would have been drawn to the capital by the prospect of European football, but a shock defeat to Locomotive Tbilisi on his debut in the Europa League ended that dream quickly. Since then, Lesovoy has continued showing the form that convinced his new employers to nab him from Tula, and has become an established member of Russia’s U21 squad.

Lesovoy has received a call-up to the senior Russia squad but has yet to make his debut, however, a terrible injury while playing in Dynamo Kyiv’s academy changed his career immensely. Previously a member of Ukraine’s U17 squad, his injury coincided with moving back to his homeland and joining Zenit St. Petersburg’s academy. Lesovoy was born in Moscow, and it’s unknown whether he would have switched allegiances had he not returned to his homeland, however, he would have to move again in order to find consistent first team football.

Arsenal Tula signed Lesovoy on a two-year loan deal, having seen the winger finally break into Zenit’s 2nd team towards the end of the season before playing in Russia’s second tier. His first season started promisingly, featuring in 11 of Tula’s first 13 games, before a prolonged spell on the bench. However, last season, Lesovoy flourished playing alongside Evgeny Lutsenko and Sergey Tkachev. Research from CIES found Lesovoy was one of the five best players at successfully taking on defenders in the world, and three goals and four assists were what he had to show for it. He started the 2020/21 season brightly too, scoring twice in Tula’s first six games, before the capital came calling.

“We do not have enough individually strong players in the attacking group. In modern football, front-line players should be able to easily beat one-on-one. Here we have someone who can improve that. These are the options we were looking for – those who are able to add speed and aggression and Lesovoy is a footballer of the youth national team of Russia. We hope that he will strengthen our game. Plus Daniil is a versatile footballer who can play in any position of the midfield or attack.”

As the stat from CIES suggests, one of Lesovoy’s strongest attributes is his dribbling and his numbers this season back this up. Lesovoy’s 2.7 dribbles per game is the highest number in the Dynamo Moscow squad, and only two players in the entire league have completed more, with Wanderson the only player to do so with a higher success rate. As his heatmap shows below, these dribbles tend to take place within the opposition’s half but occur both right on the touchline and in the inside-left channel, with the aim to either play a pass to a player on the edge of the box, or reach the byline and put a cross into a dangerous area. His dribbling is so outstanding because of his elite close control, players find it very difficult to dispossess him when in full flow and his agility means he can change direction much faster than many of the defenders he comes up against. 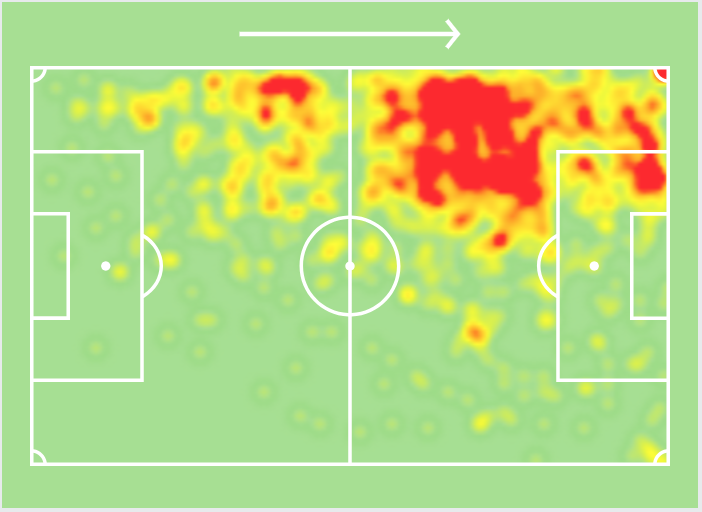 In this first example, Lesovoy (the man in possession in all three pictures) is facing up against two defenders, the first of which is trying to shuttle him out wide, while the second is monitoring his movement. Lesovoy very quickly shifts the ball onto his right foot and accelerates inside. He keeps the ball under close control, evading the challenges of the CSKA players lined up on the edge of box, before poking the pass to Moro on the edge of the D, who scores Dynamo’s consolation. His close control and acceleration create this goal, with CSKA’s players wary of diving in to make a challenge so close to goal, and knowing Lesovoy has a knack for knocking the ball past a player to draw a foul.

In this next example, Dynamo are playing Lokomotiv Moscow, who at this point have gone down to ten men and are 2-1 down. Dynamo’s centre back has stolen the ball and has started a counter attack, carrying the ball into the opposition’s half. Lesovoy is in acres of space in the inside left channel and is accelerating away from Lokomotiv’s unorganised defenders. The pass is well weighted, so Lesovoy only needs to take one touch before setting himself to shoot. The ‘keeper is in a very advanced position but Lesovoy doesn’t panic, shifting the ball onto his stronger right foot and coolly finishing to his left.

In the same game, Lokomotiv are now down to nine men, and Lesovoy has taken up a central position. He times his run well to beat a depleted offside trap and then advances with the ball. He feints to shoot so that the last defender commits to preventing the goal, meaning he is no longer in a position to block the pass across the box, giving Dynamo an easier opportunity to score and complete the rout.

In Dynamo’s game against Tambov, Lesovoy is in possession on the left during a Dynamo counter attack. Despite the space opening up in front of him, he is aware that his teammates have created an overload on the right, so checks back and plays a well-weighted curling pass with his right foot into the path of his teammate. The pass allows his teammate to take one touch in the box unopposed before shooting, and would have resulted in a goal if he hadn’t dragged his shot wide. This ability to be a playmaker in slightly deeper areas creates a problem for defenders, as they can no longer rely on trying to shuttle him out wide when in possession.

In this final example, during the same match against Tambov, Lesovoy (the player wearing white at the bottom of the first picture, and then the target of the pass in the second picture) makes a run through the middle of the park, with an impressive burst of acceleration to get away from the full back. The pass is played in front of him, although slightly later than he would have liked it so he has had to check his run slightly to stay onside. As you can see in the picture, the goalkeeper’s weight has already shifted to his left, as he was expecting Lesovoy to take the shot with his stronger right foot, but instead he lets the ball run across him and scoops the ball into the empty half of the goal with his left instep.

Dynamo Moscow are in contention to qualify for European football once again this season, although whether they succeed or not is unlikely to affect Lesovoy’s immediate career plans having only just joined the club. Continuing to develop in Russia at this point of his career makes sense, although the chances of Lesovoy moving on in the future are made even more tricky by the high premium put on Russian players in the RPL.

And Finally on Russia…

Mikhail Galaktionov has managed every one of Russia’s youth teams during his career and has been in charge of the under-21s since 2018. He has another strong crop of players to choose from for the upcoming Under-21 European Championships, although there are a few players missing that he would have liked to have available. Exciting FC Krasnodar’s goalkeeper Matvey Safonov was touted for a senior call-up, but a torn tendon means he’s unavailable for any of Russia’s teams in March, while Lesovoy’s former teammate at Arsenal Tula Nikolay Rasskazov also misses out despite featuring heavily in qualifying.

There are some established stars in the squad that will give Russians confidence that they should progress to May’s knockout rounds, with Roman Evgenyev, Igot Diveev, Nail Umyarov, Ivan Oblyakov and Fedor Chalov all included. This gives Russia one of the strongest spines in the tournament, and if Lesovoy, Aleksandr Lomovitskiy and Konstantin Kuchaev can be the creative sparks of the team, there’s no reason why Denmark or Iceland should give this side much trouble in Group C, although France’s elite squad will be a much tougher test.